Alphonso Davies had a coming-out party Tuesday in Bayern Munich’s Champions League win over Chelsea. Jonathan David scored a hat trick for KAA Gent on the weekend and leads the Belgium League in scoring.

It’s been a good week for Canadian soccer.

But success comes at a cost with demands on top players. And so while eligible to play, Davies and David won’t be part of the Canadian men’s upcoming Olympic qualifying campaign.

Olympic men’s soccer qualifying has been an under-23 competition since 1992. Beginning in 1996, teams that qualified for the Olympics were allowed to field three players over the age limit.

Davies, 19, and David, 20, were absent from the list after making headlines this week.

Davies, who has won 17 caps for Canada in a variety of positions including wide forward, drew rave reviews for his pacey performance in Bayern’s 3-0 win at Stamford Bridge. The young Canadian was a standout at left back, setting up Robert Lewandowski’s third goal with an electric run that left defenders in his wake.

“In all moments of the game now, he just starting to show mastery – at 19 years of age,” said Canada coach John Herdman. “And he’s only been in (the left back) position for a period of time.

“He’s a lot more than just a guy who can run 36 kilometres per hour,” he added. “He’s starting to become the full package.”

David, who has 11 goals in 12 senior appearances for Canada, went on a scoring spree against Sint-Truidense VV to up his Belgian league season total to 18. He has been linked to several big clubs in recent days.

Herdman, however, says there’s more to David than goals.

“People will see when you start to peel beneath the layers of what Jonathan offers, there’s a flexibility in how he can play in a number of positions,” he said. “I know that’s what me and Mauro (Olympic coach and senior assistant coach Mauro Biello) had seen in the first camp. Just how smooth he was, whether he was a wide forward or playing as No. 9 or a false No. 9. He just has this football IQ.

“And I think when scouts and clubs are looking, they’ll see it’s the statistics of what he can do consistently in a game at a high level that will be really be attracting them as well as the goals.”

Canada’s Olympic team camp and part of the qualifying tournament falls outside the FIFA international window (March 23-31), meaning clubs don’t have to release their players for the entire stretch.

Complicating matters is the fact that Canada’s senior side has matches scheduled March 27 and 31 against Trinidad and Tobago in Langford, B.C. While they are friendlies, they are important because Canada is chasing El Salvador in the rankings in a bid to make the Hex, the most direct route of World Cup qualifying in the region.

Davies and David will feature in those matches.

So would Canada Soccer have named the duo to the Olympic qualifying roster had all the obstacles been removed or have the talented youngsters moved past the under-23 level?

“There’s an element of that progress, but the Olympics are the Olympics,” said Herdman. “It’s a pinnacle event. It’s a once-in-a-lifetime opportunity for players, particularly with it being U-23.

“And it’s certainly something our country rallies around. Everyone gets excited when that Olympic period’s in. So there would be nothing better than to see a men’s team at an Olympics competing for Canada.”

It’s a tough competition to make, with just 16 men’s teams in the field.

Canada has taken part in just two of the 24 Olympic men’s soccer competitions and has failed to qualify for the last eight Olympics. Its last participation came in 1984 in Los Angeles.

Of the 50 players on the provisional list, 19 have been called into camp by the senior side and 16 have won a senior cap.

Canada will play in Group B at the CONCACAF qualifier. Group A features Mexico, the U.S., Costa Rica and the Dominican Republic.

After round-robin play, the first- and second-place finishers in the two groups will advance to the crossover semi-finals. The semi-final winners will book their ticket for Tokyo.

The CONCACAF qualifier will complete the men’s Olympic field.

Should Canada qualify, Davies and David could still be part of the Olympic roster. But the July 23-Aug. 8 competition again falls outside a FIFA window. Most European teams will be in pre-season training.

Herdman recalls trying to pry players out of their clubs for the prestigious under-21 tournament in Toulon, France.

“It is very difficult. And ultimately the pro clubs will make the final decisions on player availability because it falls outside a FIFA window,” he said. “The tournament just overlaps the required window.”

“This is a challenge for every confederation, to try and fit tournaments into ... a 10-day FIFA window,” he added. “You practically can’t do it to fit safely the games in.”

The Canadian women qualified for Tokyo by virtue of beating Costa Rica in the semi-final of their Olympic qualifier earlier this month in California. 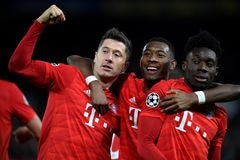 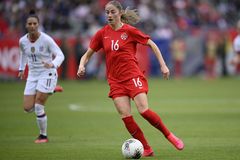 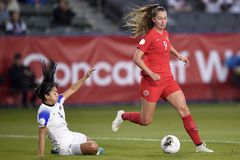