One of the defining moments of Alphonso Davies’s young soccer career came last month when the Canadian teenager went head to head against Lionel Messi, and the outcome wasn’t even close.

It was early in Bayern Munich’s Champions League quarter-final match against Barcelona and Davies was streaking down the left side on a Bayern breakaway. He blew past Barcelona’s midfield and raced toward Messi, who could only stop the 19-year-old by tripping him. As the legendary striker reached down to help Davies up, the youngster smiled.

“It made me feel a little bit happy because here’s a kid looking up to his idol, playing against his idol who fouled him and is helping him up. It was everything you can ask for as a footballer,” Davies recalled Friday from Munich during a conference call with Canadian journalists. “Me going up against him was a dream come true.”

Bayern went on to win the game 8-2, handing Barcelona its worst defeat in 74 years. Messi had no goals, no assists and was turned inside out by Davies, who set up Bayern’s fifth goal by dancing through nearly half the Barca lineup. Messi looked so dejected afterward that Davies didn’t have the heart to pester him to swap jerseys. “Losing 8-2, it’s not nice,” Davies said.

Bayern powered on and beat Paris Saint-Germain 1-0 in the Champions League final on Aug. 23, capping an unprecedented 11-game winning streak during the tournament. By then Davies’s star had truly ascended.

He’s now become one of the most talked-about soccer players in the world, a speed demon who’s been clocked at 36.5 kilometres an hour and who makes pundits such as former England striker Gary Lineker gush: “What a fabulous talent.” Davies’s exploits have been hailed by Prime Minister Justin Trudeau and won shoutouts from Drake. The City of Edmonton even lit up the High Level Bridge red and white in honour of its newest hometown superstar.

As he prepares for the start of the Bundesliga season next week, Davies is still marvelling at all the attention. “I still can’t believe all this is happening,” he said Friday. “Has it sunk in? I would say not yet.”

His success is even more remarkable considering where he came from. His parents fled the civil war in Liberia in 1999 and spent years in a refugee camp in Ghana where Davies was born. The family came to Canada in 2006, arriving in Windsor, Ont., before heading to Edmonton. Davies’s father, Debeah, got a job in a poultry plant while his mother, Victoria, worked as a janitor. Davies often had to care for his younger brother and sister, but eventually soccer became an outlet.

He started out in a league for vulnerable kids called Free Footie and later enrolled in the soccer academy at St. Nicholas Catholic School. At 11 he joined the Edmonton Strikers in the city’s youth league. “You could tell he was a very talented kid,” former Strikers’s coach Nick Huoseh said. “We played 18 league matches in a summer season and he would score a goal or two a game.”

Huoseh, who runs a telecommunications business, became more than a coach for Davies. His father had come to Canada from Palestine and he understood the challenges refugee families face. He often watched out for Davies after school and offered support to his family. He also helped arrange a tryout with the Vancouver Whitecaps.

It didn’t take long for Davies to shine on the West Coast. He made his Major League Soccer debut for the Whitecaps at the age of 15. A year later he became the youngest player to join the Canadian men’s national team.

Big clubs in Europe took notice and soon Manchester United, PSG and Bayern came calling. By then, the family had hired Huoseh as Davies’s agent.

Davies signed with Bayern in July, 2018 and Vancouver pocketed a US$22-million transfer fee, an MLS record at the time. Huoseh said Bayern didn’t offer the most money but impressed Davies with a detailed plan for his gradual development.

The plan was accelerated last October when Bayern suffered a string of injuries and Davies was inserted into the staring lineup at left back. The team was floundering at the time and a coaching change put Hansi Flick in charge. He stuck with the teenager and it soon paid off.

Davies’s lightning speed gave Bayern a new attacking style on defence and he produced four assists in his first few games. The team went on a 30-game winning streak and won the Bundesliga, the German Cup as well as the Champions League. Davies was chosen rookie of the year and signed a new five-year contract that, according to German media, could pay him up to €5-million a season, or $7.8-million. The International Centre for Sports Studies has pegged his market value at €133.5-million, putting him among the 10 most expensive players in Europe.

This season could be even better for Davies. Bayern has signed star winger Leroy Sane from Manchester City, who will line up in front of Davies. There’s also World Cup qualifying in March and Davies is keen to help Canada make it to the final for the first time since 1986.

For now, he’s relishing life in Munich and a new season of soccer. “I’m just happy that I’m over here in Germany proving myself,” he said. “And being a Canadian, it’s amazing.” 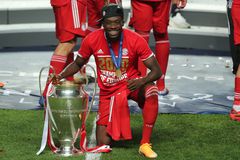 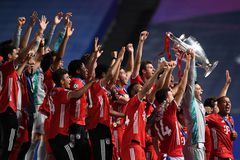 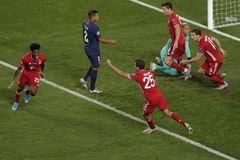