Sunday is the final game. It’s the United States vs. the Netherlands, and the audience will be in the tens of millions. To borrow from the theme song of an iconic American TV sports program: “Are you ready for some football – women’s football?” The answer, across the globe, has been a resounding yes. Finally.

There have been two big storylines from this year’s Women’s World Cup of soccer. The first is the brilliance of the play and the quality of the games. It’s why record numbers are watching.

The second is the tournament’s hero and villain. Team U.S.A. is both.

For the U.S. media, the squad is an avatar of progress, social justice and anti-Trumpism. Their opponents on the pitch, in contrast, are just central-casting foils sent out to generate some tension en route to a Hollywood ending.

For the rest of the world’s fans, the U.S. women also bestride the plot – though rather more in the way that, say, Darth Vader and the Death Star loom over Star Wars.

These intense feelings about a sport and its protagonists, with emotions running from love to hate and all stops in-between, is what happens when people get engaged enough to care about who wins, and how. On that score, the 2019 World Cup has been a triumph.

For example, the semi-final match between England and the United States was watched by a U.S. television audience of more than seven million. But it’s in soccer-mad countries, many of which long treated the women’s game as a fringe pastime, where the number of fans has been remarkable.

In Brazil, the June 23 match against France was watched by more than 35 million viewers. That’s the largest domestic audience for a women’s soccer game, anywhere, ever. In France, TV network TF1 recorded its highest ratings of the year for the France-U.S. quarterfinal. In Germany, 7.9 million people watched their country take on Sweden. In Italy, 7.3 million people tuned in to the Azzurri’s first game of the tournament. The previous record for an Italian women’s game was 202,844 viewers.

And in the United Kingdom, the semi-final between England and Team U.S.A. had a peak audience of 11.7 million. Those ratings have left the men’s cricket World Cup in the dust, despite cricket being a British staple, the tournament being in the U.K. and did we mention that this is men’s cricket?

All of which has powered the drive for equal pay, or at the very least better pay, for female players. It’s been one of the signature issues for Team U.S.A, and part of the reason they are lionized at home.

In March, the team sued its own national federation for discrimination. Exhibit A: America’s three-time champion women received US$1.725-million for winning the World Cup in 2015, whereas the U.S. men, eliminated in the round of 16, got US$5.37-million. And while total prize money at the women’s World Cup was doubled this year, to US$30-million, the 2018 men’s event pool was US$400-million.

And not only is the team fighting for equal pay, their best player, who long ago took up Colin Kaepernick’s mantle of anthem protests, is in a Twitter feud with President Donald Trump. Fighting the patriarch-in-chief, they’ve become Team Resistance, and those who criticize them risk a social-media mobbing, at least in the United States.

It started with their 13-0 thumping of hapless Thailand. The score wasn’t the problem, but the excessive celebration of every goal raised hackles. There was the U.S. player who said, after the squad started seven new players in their second game, that Team U.S.A. was “the best team, and the second-best team.” There was a hotel-scouting incident the British press dubbed “Spygate.” There was the “Tea Party” after scoring against England.

Team U.S.A. has repeatedly cast itself as the jerk jock from every 1980s teen movie – Cobra Kai to everyone else’s the Karate Kid.

Which is one more reason Sunday will be must-see TV. You know who to cheer for. 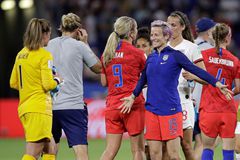 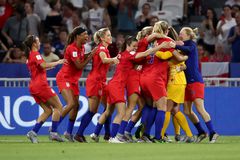