Canada collected another valuable away point Sunday in a scoreless draw with Jamaica in the final round of CONCACAF World Cup qualifying.

The Canadians (1-0-4) remain unbeaten in the final round of qualifying in the region. But they may rue not picking up three points, squandering a gilt-edged chance falling to Liam Millar in the second half of a game where clear scoring chances were few and far between.

The contest, played on a bumpy pitch at an empty Kingston National Stadium, was no work of art. The Canadians had more of the ball in the first half but neither team put a shot on target in the first 45 minutes.

Jamaica (0-3-2), which hit the post early in the second half, looked most dangerous on set pieces and crosses. Canada, meanwhile, failed to take advantage of numerous corners.

Jamaica goalkeeper Andre Blake made a remarkable save in the 60th minute to deny Millar, who seemed to have an open net after a fine low cross from Alphonso Davies. Canada coach John Herdman was left with his hands on his head in disbelief after the athletic Blake, the reigning MLS goalkeeper of the year with the Philadelphia Union, somehow covered the gap to get his hands to the ball.

Jamaica took no prisoners with Andre Gray lucky to escape with a yellow card in the eighth minute for elbowing a Canadian defender to the ground.

The struggling Reggae Boyz came into play Sunday at the bottom of the Octagonal round-robin with just one point, five below the Canadian men after four games. Herdman called Jamaica “a wounded animal at the moment.” Jamaica’s Gleaner newspaper called it “a day of reckoning” for the home side.

Canada, ranked 51st in the world, was coming off a fine showing Thursday in a 1-1 tie with powerful Mexico in the hostile confines of Mexico City’s Azteca Stadium.

Canada has history at Azteca Stadium, but little of it has been good

Canada opened play in the final qualifying round by tying visiting Honduras 1-1 before drawing the U.S. 1-1 in Nashville and blanking El Salvador 3-0 in Toronto. The Canadians now return to Toronto to play host to No. 68 Panama on Wednesday at BMO Field.

The Canadians were without the injured Atiba Hutchinson, Cyle Larin and Lucas Cavallini as well as veteran goalkeeper Milan Borjan, who is recovering from COVID-19. Richie Laryea, Tajon Buchanan and Steven Vitoria were suspended after picking up yellow cards, their second of the round, in the second half against Mexico.

Herdman made five changes to his starting lineup, with Henry, Sam Adekugbe, Derek Cornelius, Samuel Piette and Millar slotting in for the three suspended players with midfielder Stephen Eustaquio, who is on a yellow card, and defender Kamal Miller dropping to the bench.

The Canadian starting 11 came into the game with a combined 281 caps with Piette, Osorio and Henry accounting for 142 of them.

Junior Hoilett and David Wotherspoon started on the bench, having joined the team in Jamaica after skipping the Mexico portion of the trip owing to the quarantine in Britain necessitated by a visit to Mexico.

It was a choppy first half with both teams looking to suffocate the other.

The Jamaicans kept a close eye on Davies with Fisher yellow-carded in the seventh minute for taking down the speedy Bayern Munich star. Davies’s left-footed shot was just wide in the 15th minute.

Henry had a chance in the 19th after interplay between Davies and Millar but his attempted volley was off-target.

Davis went down in the 20th minute, caught in the face by a swinging arm from Je-Vaughn Watson, who had been booked minutes earlier.

More Jamaican physical play left Davies writhing on the ground again in the 26th minute after Fisher fell on his leg. But the 20-year-old Canadian kept going. Jamaica lost Powell to an apparent leg injury in the 37th minute.

Jamaica had another good chance in the 38th when a cross found Junior Flemmings in space at the far post but his header was blocked by Canadian Alistair Johnston.

Jonathan David managed the first Canadian shot on-target in the 46 minute, with Blake making the save, after a slashing run by Davies opened up the defence. Davies then shot just wide on a free kick from outside the penalty box in the 48th minute.

Two minutes later at the other end, Flemmngs’s header hit the post after a fine set piece delivery from Lawrence.

Eustaquio came close after coming on in the second half, heading just wide in the 73rd. Maxime Crépeau made a diving save on Lawrence’s long-range shot in stoppage time.

Each of the eight teams in the Octagonal play 14 matches. Come March, the top three sides will book their ticket to Qatar 2022 with the fourth-place team taking part in an intercontinental playoff to see who joins them.

It marks Canada’s first trip to the final round of qualifying in the region since the lead-up to France 98. The Canadian men have only ever taken part in one World Cup, in 1986 in Mexico.

Canada won 2-0 the last time the two met, in September, 2017, at BMO Field. That game saw a 16-year-old Davies sent off in the 75th minute for kicking out at Jamaica’s Lowe after the two went down in a tangle in the corner.

The Canadian men were 1-4-4 in Jamaica, losing their past four games there. The last meeting between the two at Kingston National Stadium was a 1-0 Jamaica win in January, 2010. 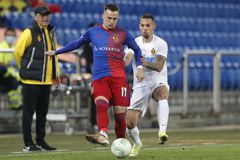 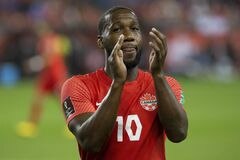 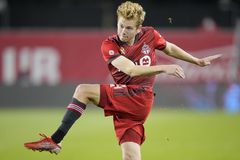