Canada conceded a goal 20 seconds in and lost 1-0 to the United States in their final preliminary-round game Sunday at the Gold Cup.

The Canadian men found their way back into the game after Shaq Moore’s opening goal but were unable to breach the U.S. defence despite having the edge in play as the match wore on.

With both teams already qualified for the quarter-finals, the game at a sold-out Children’s Mercy Park decided first place in Group B. The North American rivals came into the game with the same goal difference but 70th-ranked Canada had scored one more goal, meaning the 20th-ranked Americans had to win to finish first while the Canadians only needed a draw.

Canada came into the match 8-0-0 in 2021, outscoring mainly lesser opposition 39-3, with its most recent loss coming in January, 2020, a 1-0 defeat at the hands of Iceland. But the U.S. represented a significant increase in the degree of difficulty.

It was a disastrous start for Canada, which conceded 20 seconds in. Canada failed to win several duels in its own end and Sebastian Lletget, given plenty of space on the left flank, sent in a low cross that eluded goalkeeper Maxime Crépeau and set up Moore for a tap-in at the far post. It was his first goal in his eight senior U.S. appearances.

Moore, who plays for Tenerife in Spain, was the lone non-MLS starter for the U.S.

U.S. Soccer said it was the fastest goal in U.S. men’s national team history, at least back to 1989 when “consistent time records” started to be kept.

As the Group B winner, the U.S. faces the runner-up in Group C in the quarter-finals. That means taking on either No. 45 Jamaica or No. 50 Costa Rica, who meet Tuesday to decide the group.

Canada, as the Group B runner-up, ends up in the bottom half of draw, which could feature No. 11 Mexico if it wins Group A. But to do that the Mexicans, thanks to a scoreless draw with No. 103 Trinidad and Tobago, had to beat No. 69 El Salvador later Sunday.

Canada lost Ayo Akinola in the 24th minute and fellow forward Cyle Larin in the 53rd, both to injury.

Akinola, making his first start and second appearance for Canada since switching allegiance from the U.S., could not continue after his knee appeared to twist in a challenge with James Sands. Larin, who had scored five goals in his four previous matches, exited in the 53rd after going down.

The Americans came into the match holding a 15-9-11 advantage in the all-time series, which dates back to a 1-0 Canadian win in Montreal in June 1925.

The lone Canadian win in recent times came October 2019, a 2-0 triumph in Toronto in CONCACAF Nations League play. The Americans won the rematch the next month 4-1 in Orlando.

Lletget and Gyasi Zardes were the only two U.S. starters from that Orlando win to feature in Saturday’s starting 11. Steven Vitoria, Samuel Piette and Richie Laryea started in both matches for Canada.

Prior to Sunday, the Canadians were 1-12-9 in matches against the U.S. on American soil, with the lone win coming in July 1957, a 3-2 victory in St. Louis in a World Cup qualifying match.

The U.S. kept up the pressure after shocking Canada with the early goal, dominating possession until the Canadians found their way late in the half, stringing passes together.

Canada appealed unsuccessfully for a penalty in the ninth minute when Laryea and Walker Zimmerman tangled in the penalty box as Laryea tried to round the U.S. captain, who lost his balance as the two players tried to fend each other off.

“How is that not a penalty not even a free kick,” tweeted injured Canadian star Alphonso Davies.

Zimmerman was injured on the play and was replaced by Donovan Pines in the 15th minute.

Kamal Miller made a saving tackle to stop U.S. striker Daryl Dike from going in alone in the 30th minute after a loose pass from Alistair Johnston.

Defender Sam Vines rescued the U.S. in first-half stoppage time, getting a foot to the ball before Johnston could at the far post.

Canada came out strong in the second half, with Matt Turner making saves off Larin and Tajon Buchanan in the first two minutes. Buchanan’s speed and dribbling ability has caused opponents problems the entire tournament.

Buchanan just missed in the 79th minute, bending his shot just wide of the goalpost.

Canada coach John Herdman called it a “derby match,” but acknowledged next weekend’s quarter-finals were on his mind.

“At the end of the day, to get to the Gold Cup final you have to win another two matches after this,” Herdman said before the game. “This is an important game, I think, for the fans, for the players. But all in all as a head coach you have to look with one eye on the next game.

“You can’t predict too far ahead. But what I do know is I want my best group of players, the most talented group available for that quarter-final. That’s a critical game for Canada.”

Sunday’s match was a precursor to a Nashville meeting on Sept. 5 in the final round of World Cup qualifying in the region that covers North and Central America and the Caribbean. Canada will host the Americans on Jan. 30 as the so-called Octagonal continues.

Both teams brought young squads to the Gold Cup, with many of their star players away with their clubs or injured.

Herdman made five changes to the starting lineup that beat Haiti, bringing in Laryea, Piette, Akinola, Liam Fraser and Junior Hoilett. Influential midfielder Stephen Eustaquio, who scored in each of the 4-1 wins over Martinique and Haiti, was suspended.

Vitoria, Fraser and Johnston were all on a yellow card, meaning a second caution would earn a suspension. Lucas Cavallini and Mark-Anthony Kaye, also on yellow cards, dropped to the bench.

U.S. coach Gregg Berhalter made four changes from the starting 11 that trounced Martinique 6-1, adding experience in the form of Kellyn Acosta (33 caps going into the match), Lletget (25) and Zardes (58). Vines also slotted back in for his fourth cap. 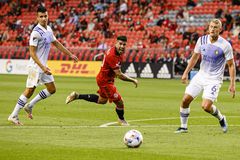 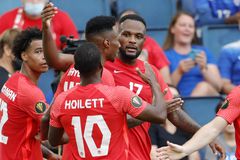 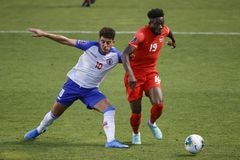