While still a year away from kicking off, the Canadian Premier League is ready for its reveal.

It started Friday with the unveiling of the domestic men’s soccer league’s emblem, a stylish combination of the Maple Leaf and North Star, and a “video manifesto.”

David Clanachan, CPL chairman and commissioner, says there is more to come. In May the league will start announcing the cities that will field teams in the spring of 2019.

“We’re very close to starting to really share and make it real for Canadians across the country,” Clanachan said.

The team announcements will come one by one, complete with logos and colours.

The league expects to launch with eight to 10 teams. Winnipeg and Hamilton are the only two announced entries to date, although Clanachan makes no secret of the interest being shown by Edmonton and Halifax.

“I’ve never seen anything so amazing. We’ve got supporters in those two markets who are almost challenging us, daring us not to give them a professional soccer club,” he said.

The league is talking to up to 20 communities/cities, he said.

One the club lineup is announced, the league will start revealing details of roster and other rules.

“In the neighbourhoods and cities that make us who we are, this is a league we can call our own. For Canadians, by Canadians,” says the video.

The CPL previously announced the launch of Canadian Soccer Business, which will represent “commercial assets and inventory for marquee soccer properties in Canada.” The new group, which will be headed up by Hamilton Tiger-Cats boss Scott Mitchell, has a 10-year deal with the Canadian Soccer Association. 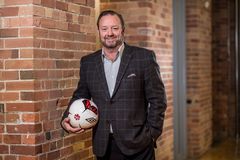