The Vancouver Whitecaps may need to stock up on maple syrup now that there are so many Canadians on the roster.

Head coach Marc Dos Santos said he didn’t plan on filling the team with homegrown talent, but 11 of the club’s 19 players are Canadian.

Seven Canucks were on the squad at the same time last year.

The Whitecaps’ lineup is full of new faces after the organization parted ways with 18 players over the off-season.

“That’s good for Canada, because if it was an intention, like I’m doing a favour for somebody or the country, it would be sometimes bad,” said the coach, who’s from Montreal.

Many of the Canadians have suited up for the national team in recent years, either at the senior or youth levels.

The squad also included Alphonso Davies, the dazzling teenage midfielder who the Whitecaps transferred to German soccer giant Bayern Munich in a blockbuster deal in July.

Having familiar faces around helps create chemistry and cohesion, said midfielder Russell Teibert, who suits up from both the Whitecaps and Team Canada.

“I think the guys that have been a part of (coach) John Herdman’s Canadian squad, we really do feel like we’re on to something special there. So it’s nice to bring what we’re doing with the Canadian national team back to our club this year.”

The national team comradery is part of what influenced 21-year-old Derek Cornelius to sign with Vancouver last week. He had been playing overseas for years, most recently with the Serbian club FK Javor Ivanjica.

Cornelius said he knew a lot of Whitecaps players from Team Canada.

“Speaking with them, they said (Vancouver’s) a good place to play and it’s something I wanted to be a part of,” the centre back said.

It will be good for Cornelius to be around so many national team players on a daily basis, said Doneil Henry, who played with the young defender twice in international play last year.

Going into his eighth Major League Soccer season, Henry believes he has experience to share with Cornelius.

“He’s a young centre half and he has all the tools to be really great,” said the 25-year-old.

“And me being a little bit more experienced, I can help him along the way. That’s what I wish I had when I was growing up, coming through the youth levels and even in Europe, that I had an older centre back who wanted to see me do well and kind of put me under his shoulder and teach me the ropes.”

There may be a point during this season where Dos Santos temporarily loses a large part of his Canadian contingent to national team duty.

Canada is vying for a spot in this year’s CONCACAF Gold Cup, which is being held across the U.S. in June and July.

“It’s so tough to build the roster while at the same time thinking about all of that. It’s going to drive you crazy,” the coach said.

“If all of our team go to their national team, the first sign is it’s because they’re good. You have to have some quality to be an international. And if that makes some of the academy kids have to step up and take opportunities, that’s good for the club too. We want to make sure that we have in our club the best players possible.”

The 32-year-old has spent the majority of his career in Spain, including more than 200 matches in La Liga 2.

“Jon brings a wealth of experience to our club and has played consistently in highly competitive environments,” Dos Santos said in a statement. “He has a strong understanding of the demands we require in the defensive midfielder position. He’s an excellent distributor of the ball, technical, tenacious, and another important piece as we continue to build our roster.”

Alphonso Davies starts on the bench for Bayern Munich as Bundesliga restarts
January 18, 2019 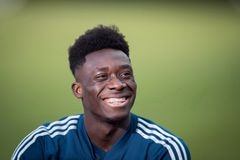 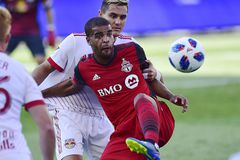 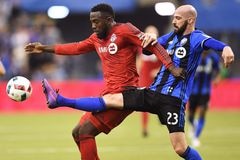