Uncapped Stephen Eustaquio and centre back Amer Didic are both on coach John Herdman’s roster. It’s a first call-up for Eustaquio, a midfielder with Mexico’s Cruz Azul who is returning from injury, and the second for Didic, a centre back with FC Edmonton of the Canadian Premier League.

The Canadian men, ranked 75th in the world, are looking to secure valuable FIFA rankings points with a win over the 21st-ranked Americans. Canada, currently ranked seventh among CONCACAF countries, is looking to climb into the top six so as to take the most direct route in 2022 World Cup qualifying via the so-called Hex round.

Canada is just five points behind No. 6 El Salvador in CONCACAF, after trailing the Central Americans by 30 points in the previous rankings.

Canada currently tops its group in Nations League Group A play after beating Cuba 6-0 and 1-0. The U.S. opens their campaign Oct. 11 against the visiting Cubans in Washington before heading to Toronto.

Canada and the U.S. meet again Nov. 15 in Orlando.

The winner of the three-team group advances to the tournament’s final four.

The Americans are currently ranked second in CONCACAF, which covers North and Central America and the Caribbean, behind No. 12 Mexico. While the Americans appear to be finding their feet under new coach Gregg Berhalter, history is not on the side of the Canadians.

On the plus side, two of the past three meetings have been 0-0 draws, with the U.S winning the other match 1-0.

“We know the quality of the USA and the history of results in the last two decades, but with the fans behind us we can work together to change that narrative in October and November,” Herdman said in a statement.

No. 1 goalkeeper Milan Borjan is the veteran on the Canadian roster with 47 appearances, including 20 clean sheets. Blackburn Rovers goalkeeper Jayson Leutwiler comes in for Cavalry FC’s Marco Carducci, who faces Forge FC in the first leg of the CPL final on Oct. 26.

Striker Lucas Cavallini returns to the roster after missing the Cuba games because of his wife’s pregnancy. Other attacking options include Jonathan David, Alphonso Davies and Junior Hoilett.

Henry has been included even though he is ineligible to play Oct. 15 after being sent off in the 1-0 win over Cuba.

Tesho Akindele, Liam Fraser, Cyle Larin, Adam Straith and David Wotherspoon – like Carducci – were part of the Cuba roster but do not make the Oct. 15 squad.

Veteran midfielder Atiba Hutchinson, who missed the Cuba games though injury, remains out.

The six-team Hex group is the primary path in CONCACAF World Cup qualifying with 3½ spots up for grabs.

Teams ranked No. 7 through No. 35 in the region will have to qualify the hard way, slogging though the rest of the CONCACAF field with the last team standing facing the fourth-place finisher in the Hex to determine the CONCACAF representative in a FIFA intercontinental playoff to get to the World Cup. 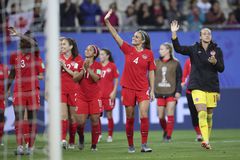 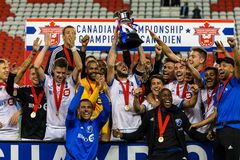 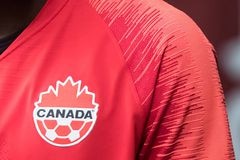