Having finally ended a goal drought, Alireza Jahanbakhsh is now celebrating the greatest strike of his career.

With an acrobatic overhead kick, the Brighton forward stunned not just Chelsea but his own team, too.

The south-coast club’s record signing had endured 18 months without a goal until scoring in Saturday’s victory over Bournemouth.

Now the Iranian has two goals in two games, coming off the bench to deny Chelsea a victory by sealing the 1-1 Premier League draw.

“When [Lewis Dunk] gave me that ball, I tried to hit it as hard as possible,” Jahanbakhsh said. “The only way to connect with it was just to bicycle kick it, and it went in the right direction. It’s a great feeling to be involved in such important games and I’ve been working hard to get my chance.

“It’s been a very tough time for me, but I’m very glad to turn it around in a great game.”

The 84th-minute bicycle kick lifted Brighton four points clear of the relegation zone. It was a setback for an erratic Chelsea side, with Christian Pulisic wasting chances to extend the lead secured by captain Cesar Azpilicueta in the 10th minute.

Chelsea still strengthened its grip on fourth place to five points thanks to Manchester United losing 2-0 at Arsenal but it could have been a greater cushion.

Tottenham’s top-four chase also had a setback with a 1-0 loss at Southampton.

Runaway leader Liverpool is not in action until Thursday against Sheffield United. Leicester is 10 points behind, having played two games more, after Ayoze Perez, James Maddison and Hamza Choudhury scored in a 3-0 win at Newcastle.

Mikel Arteta earned his first win as Arsenal manager at his third attempt through first-half goals from Nicolas Pepe and Sokratis Papastathopoulos. After collecting one point from his first two games since replacing Unai Emery, Arteta secured Arsenal’s first win at home in the league in three months to guide the north London club up to 10th place.

David Moyes received a lukewarm reception from West Ham fans as he returned to the dugout he vacated in May, 2018. They were soon celebrating as Mark Noble scored twice, and Sebastien Haller and Felipe Anderson also netted as the East London club cruised to a victory over Bournemouth in the first game since Manuel Pellegrini’s firing. West Ham is two points and two places above the relegation zone.

Tottenham manager Jose Mourinho grumbled about a Southampton coach and VAR after Danny Ings’ goal handed Spurs a 1-0 loss. There was also the blow of losing striker Harry Kane to a hamstring injury after he had a possible equalizer ruled out for an offside that riled Mourinho. The Portuguese was booked by referee Mike Dean for going over to the Southampton bench after arguing with goalkeeping coach Andrew Sparkes over apparent time-wasting. “I think the yellow card is fair because I was rude but I was rude to an idiot and for some reason, for some reason I was rude,” Mourinho said. “But I was and because I was rude I deserve the yellow card.”

Villa midfielder Jack Grealish’s early header was ruled out at Burnley after a lengthy VAR review determined that striker Wesley’s heel was offside in the buildup. But the goal did count when Grealish set up Wesley in the 27th minute before striking powerfully in the top corner himself before halftime. Burnley pulled one back through Chris Wood’s header in the 80th but Villa held on to move a point above the relegation zone. 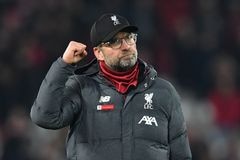 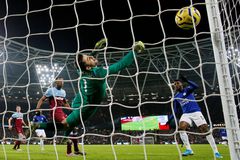 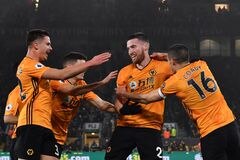