Much has happened in the world since Christine Sinclair made soccer history in January en route to helping the Canadian women book their ticket to the Tokyo Olympics.

“For me a defining moment in Canadian sporting history,” said Canada coach John Herdman, who coached Sinclair and the Canadian women prior to taking over the men’s program in January, 2018. “To have a kid from Burnaby become the greatest of all time.

“And that’s a record that I don’t know how long that’s going to take to be beaten by a male or a female. And she’s Canadian.”

Sinclair’s record-breaking year has earned the Canadian soccer icon the Bobbie Rosenfeld Award as The Canadian Press female athlete of the year for 2020.

The 37-year-old Sinclair also won the award in 2012 after leading Canada to a memorable bronze medal at the London Olympics. She is the only soccer player to have won the Rosenfeld Award.

The winner of the Lionel Conacher Award, presented to CP’s male athlete of the year, will be announced Tuesday. The team of the year will be unveiled Wednesday.

Sinclair received 20 of 66 votes cast by sports editors, writers and broadcasters across the country.

“Olympic qualifying seems three years ago, seems like a different world,” Sinclair told CP on Day 12 of her quarantine in coming home for the holidays.

“Obviously, the record for scoring, God that seems so long ago, was an important milestone,” she added. “And especially with the way the rest of the year went, it’s definitely been one of the highlights It’s pretty cool to see a Canadian on the top of the record charts, I’m not going to lie.”

Sinclair moved atop soccer’s all-time goal-scoring list – for both men and women – on Jan. 29.

“It was such a relief,” she said. “Those people closest to me know how much it had been weighing on me and, like, stressing me out, in a way. So I was glad to get it out of the way in that opening game [at the CONCACAF tournament] and as a team, we could just move on and I could move on and focus on what we were really trying to accomplish, which was getting to Tokyo.”

The high of qualifying for Tokyo was followed by the low of Canada having to pull out of the Games, which were later postponed to 2021 because of the COVID-19 pandemic.

“For many months, all of us, our professional seasons were all suspended. No international games. We were doing workouts on our patios as a team. We were following [midfielder] Desiree Scott’s Zumba classes.”

Added Sinclair: “It’s been a hard year for everyone. Everyone has their own stories.”

But she sees “little glimmers of hope that things will turn around soon.”

The Canadian women, tied for eighth in the world rankings, have not played since March 10, when they drew Brazil 2-2 at an international tournament in France.

Sinclair is proud that the National Women’s Soccer League was the first North American league to return, playing the Challenge Cup in a bubble in Utah. She had spent much of the lockdown, prior to the league’s return, in Florida with Charlie, her Pomeranian dog.

Sinclair then captained Portland at the NWSL Challenge Cup in June-July and went on to lead the Thorns to the NWSL Fall Series title in October.

Despite the challenges of the pandemic and the resulting stop-start season, Sinclair was happy with how she played.

“When the games finally did come around, I was happy with how I performed. It was just hard to get into a rhythm individually and as a team. I think we started to put things together toward the end in Portland, which makes me very excited for next year.”

Sinclair is realistic about the pandemic, knowing health and safety comes before sport. She knows a return to normality will take time, but hopes the prospect of vaccines means fans will return to the stands.

“It seems like it’s been forever since I’ve played in front of a real crowd. I can’t wait to get back to Portland and hopefully one day next year be able to play in front of 20,000 fans again. But it has to be smart and safe first and foremost.”

Sinclair has taken pleasure in seeing Canadian teammates make their mark at clubs around the globe.

“It’s exciting to see. This team is just getting better and better. And the individuals are finally, I think, being recognized around the world. It’s an exciting time to be a Canadian footballer, especially those players over in Europe right now absolutely killing it, making all of us back here in North America very proud.”

Off the field, Sinclair campaigns for causes close to her.

Sinclair, whose mother, Sandi has multiple sclerosis, continued her fundraising efforts to help fight MS. In April, she showed her support and appreciation for front-line workers through the Canadian Olympic Committee’s “We Are All Team Canada” campaign.

In October, she joined forces with the Canadian Women’s Foundation to help raise funds for girls affected by the pandemic.

Sinclair entered the record books with a pair of goals in an 11-0 romp over St. Kitts and Nevis, then ranked 127th in the world, in Edinburg. After tying the record from the penalty spot for a 1-0 lead in the seventh minute, she got some help from her friends on the milestone goal.

Jessie Fleming stole the ball from a St. Kitts player, sending it to an on-rushing Adriana Leon in space. Leon and Sinclair found themselves on a two-on-one and Leon passed the ball to an unmarked Sinclair, who took a touch with her left foot and then slotted the ball into the corner with her right foot from six yards out.

A smiling Sinclair turned, her arms outstretched, and pumped her fists before Leon arrived to hug her. The goal celebration continued on the sideline with Sinclair rolling the ball into her teammates, who went down like bowling pins.

Behind her, the Canadian substitutes had donned goat masks to honour the Greatest Of All Time.

After the game, Sinclair said simply she lives her life “trying to be the best Canadian that I can, in my own way.”

St. Kitts became the 41st country Sinclair has scored on. Her A to Z of goal victims ranges from Argentina to Zimbabwe.

She then scored goal No. 186 in a win over Mexico on Feb. 4 at the Olympic qualifier. Canada went on to finish runner-up to the United States at the tournament.

According to Canada Soccer, Sinclair has scored more than 300 goals across her international and club career. She also collected 110 goals at the University of Portland.

Scoring goals is the most difficult thing to do in football. Sinclair has always made it look easy, putting the ball where the goalkeeper isn’t.

She has also made the Canadian national team welcoming to all ages.

“Christine is a very special human being, and I keep saying good things happen to good people,” Herdman said.

“She’s a very, very good Canadian and the way that she’s conducted herself – she’s supported her teammates – the way that she carries herself as an ambassador for this country on and off the pitch, it just doesn’t surprise that there’s more and more awards coming even though she’s in sort of the twilight years of her career.” 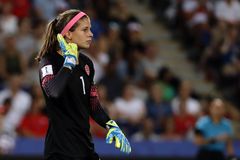 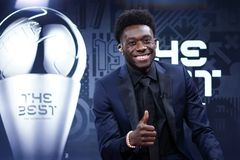 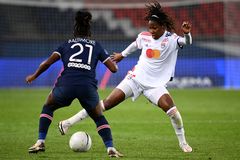