All day, there had been noise. The songs had started early in the morning, as the first few hundred fans appeared on Wembley Way, flags fluttering from their backs. They had echoed through the afternoon, as first tens and then a hundred thousand more had joined them, as shattered glass crunched underfoot.

The songs started as soon as the train doors opened at the Wembley Park underground station, the paeans to Gareth Southgate and Harry Maguire, the renditions of Three Lions and Sweet Caroline, and they grew louder as the stadium appeared on the horizon, until it seemed as if they were emanating from the building itself.

Inside, the noise rang around, gathering force as it echoed back and forth when it seemed as England was experiencing some sort of exceptionally lucid reverie: when Luke Shaw scored and the hosts led the European Championship final inside two minutes and everything was, after more than half a century, coming home.

There was noise as Italy scrapped and clawed its way back, taming England’s abandon and wresting control of the ball, Leonardo Bonucci’s equalizer puncturing the national trance. That is what happens when individual nerves bounce around and collide with tens of thousands more nerves: the energy generated, at some atomic level, is transformed and released as noise.

There was noise before extra time, Wembley bouncing and jumping because, well, what else can you do? There was noise before the penalty shootout, the prospect that haunts England more than any other. It was a day of noise. It has been, over the past few weeks, as England has edged closer and closer to ending what it regards as its years of hurt, a month of noise.

What all of those inside Wembley will remember, though, the thing that will come back to them whenever they allow – whenever they can allow – their minds to flick back to this day, this moment, is not the noise but the sudden removal of it, the instant absence of it. No sound will echo for as long as that: the oppressive, overwhelming sound of a stadium, of a country, that had been dreaming, and now, started, had been awakened, brutally, into the cold light of day.

Solipsism does not fully explain England’s many and varied disappointments over the past 55 years, but it is certainly a contributory factor. Before every tournament, England asserts its belief that it is the team, the nation, that possesses true agency: the sense that, ultimately, whether England succeeds or fails will be down, exclusively, to its own actions. England is not beaten by an opponent; it loses by itself.

This, as it happens, may have been the first time that theory had the ring of truth. England hosted more games than any country in Euro 2020. Wembley was home to both the semi-finals and the final. More important, Southgate had at his disposal a squad that was – France apart, perhaps – the envy of every other team here, a roster brimming with young talent, nurtured at club teams by the best coaches in the world. This was a tournament for England to win.

In that telling of Euro 2020, Italy was somewhere between a subplot and a supporting cast. That is the solipsism talking again, though. Perhaps this tournament was never about England, desperately seeking the moment of redemption it has awaited for so long. Perhaps the central character was Italy all along.

Italy’s journey does not have the grand historical sweep of England’s, of course – it won the World Cup only 15 years ago, and that is not the only one in its cabinet – but perhaps the story is actually about a country that did not even qualify for the World Cup in 2018, that seemed to have allowed its soccer culture to grow stale, moribund, that appeared to have been left behind. Instead, it has been transformed into a champion, once again, in the space of just three years.

Roberto Mancini’s Italy has illuminated this tournament at every turn: through the verve and panache with which it swept through the group stage, and the grit and sinew with which it reached the final. And how, against a team with deeper resources and backed by a partisan crowd, it took control of someone else’s dream.

In those first few minutes on Sunday at Wembley, when it felt as if England was in the grip of some mass out-of-body experience, as Leicester Square was descending into chaos and the barriers around Wembley were being stormed, again and again, by ticketless fans who did not want to be standing outside when history was being made, Italy might have been swept away by it all.

The noise and the energy made the stadium feel just a little wild, edgy and ferocious, and Mancini’s team seemed to freeze. England, at times, looked as if it might overrun its opponent, as if its story was so compelling as to be irresistible. But slowly, almost imperceptibly, Italy settled. Marco Verratti passed the ball to Jorginho. Jorginho passed it back. Bonucci and his redoubtable partner, Giorgio Chiellini, tackled when things were present and squeezed space when they were not.

It felt England was losing the initiative, but really Italy was taking it. Federico Chiesa shot, low and fierce, drawing a save from Jordan Pickford. England sank back a little further. Italy scented blood. Bonucci tied the score, a scrambled sort of a goal, one borne more of determination than of skill, one befitting this Italy’s virtues perfectly.

Extra time loomed. Mancini’s team would, whatever happened, make England wait. The clock ticked, and the prospect of penalties appeared on the horizon. For England, one last test, one last ghost to confront, and one last glimmer of hope. Andrea Belotti was the first to miss for Italy in the shootout. Wembley exulted. It roared, the same old combustion, releasing its nerves into the night sky.

All England had to do was score. It was, after two hours, after a whole month, after 55 years, the master of its destiny. It was, there and then, all about England. Marcus Rashford stepped forward. He had only been on the field for a couple of minutes, introduced specifically to take a penalty.

As he approached the ball, he slowed, trying to tempt Gianluigi Donnarumma, the Italian goalkeeper, into revealing his intentions. Donnarumma did not move. Rashford slowed further. Donnarumma stood still, calling his bluff. Rashford got to the ball, and had to hit it. He skewed it left. It struck the foot of the post. And in that moment, the spell, the trance that had consumed a country, was broken.

Jadon Sancho missed, too, his shot saved by Donnarumma. But so did Jorginho, Italy’s penalty specialist, when presented with the chance to win the game. For a moment, England had a reprieve. Perhaps its wait might soon be at an end. Perhaps the dream was still alive. Bukayo Saka, the youngest member of Southgate’s squad, walked forward. England had one more chance.

And then, just like that, it was over. There was still noise inside Wembley, from the massed ranks clad in blue at the opposite end of the field, pouring over each other in delight. But their noise seemed muffled, distant, as if it was coming from a different dimension, or from a future that we were not meant to know.

Italy’s players, European champions now, sank to their knees in disbelief, in delight. England’s players stared blankly out into the stadium, desolate and distraught, unable to comprehend that it was over, that the tournament liken which everything changed had not changed the most important thing of all, that the wait goes on. And the stadium, after all that noise, after all those songs, after all those dreams, stood silent, dumbstruck, and stared straight back. 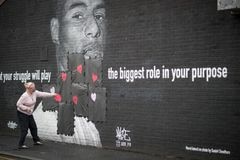 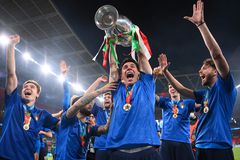 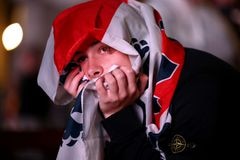