The thunder-clapping Icelanders have gone home, along with the Egyptians and Peruvians. Now comes the business end of the World Cup, a European- and South American-dominated club that rejects most new applicants as unwanted hoi polloi.

The group stage is the crossroads of cultures, a mixture of multitudes filled with happiness and hope.

Then comes the knockout stage, where soccer’s powers pump their pecs and the blue bloods almost always prevail.

Four South American teams have advanced, plus Mexico and Japan. For the first time since 1982, no African team made it past the first round.

History is instructive: Europe earned 41 of 64 quarter-final berths and South America took 16 since 1986. Among the other regions, Africa and CONCACAF got three apiece and Asia one.

Winnowing to the inner sanctum becomes even more pronounced after that: Europe filled 23 of 32 semi-final spots and South America eight, with South Korea in 2002 at home becoming the only outsider to reach the final four.

Germany’s departure was the biggest group-phase jolt. Projected by many as the first repeat winner since Brazil in 1958 and ’62, Die Mannschaft became the fourth champions in five tournaments to exit early.

FIFA has favoured the bottom of the bracket with far easier travel, with the Russia-Spain winner headed from Moscow to a quarter-final in Sochi, then potentially a semi-final and the final in the capital. The Colombia-England winner in Moscow goes to a quarter-final in Samara, then would be on track to finish at Moscow.

Lionel Messi & Co. were on the verge of elimination before Marco Rojos’s 86th-minute goal against Nigeria. With an average age of 26, France is among the youngest teams, led by dynamic 19-year-old striker Kylian Mbappé. At 31, this likely is Messi’s last chance for the World Cup title he needs to match Diego Maradona in the minds of many Argentines. While Argentina struggled, France must awaken from a somnambulant group-stage finale against Denmark.

Cristiano Ronaldo, like Messi a five-time FIFA player of the year, has four goals in the tournament and leads the European champions against a Uruguay team known foremost for the bite marks Luis Suarez left in Italian defender Giorgio Chiellini four years ago. Uruguay is the least-populous of the round of 16 teams.

World Cup hosts outside the soccer powers usually perform better than expected. Russia should have huge support at Luzhniki Stadium, making it closer than what the rankings tell us – that this is a 10th-versus-70th match-up. Andres Iniesta, who scored the goal that won Spain’s first World Cup title in 2010, remains on a rebuilt roster that struggled defensively in the group stage.

Tottenham past vs. Spurs present, with Luka Modric leading Croatia and Christian Eriksen sparking Denmark. Croatia was among the most impressive group-stage teams, beating Nigeria, Argentina and Iceland by a combined 7-1.

El Tri fans hope for the elusive quinto partido – to reach a World Cup quarter-final for the first time since 1986, which was on home soil. This is their best chance in years, with an attack led by Javier Hernandez and Carlos Vela. Centre back Hector Moreno is suspended for yellow-card accumulation. Brazilian players are trying to atone for the 7-1 humiliation against Germany in the semi-finals at home four years ago. Philippe Coutinho has become as important to the Selecao attack as Neymar.

Belgium was among three teams to go 3-0 in group play, joining Croatia and Uruguay, and No. 61 Japan will be a heavy underdog against the third-ranked Red Devils. Star forward Romelu Lukaku started the World Cup with consecutive two-goal games but missed Belgium’s group-stage finale with an ankle injury. If Belgium advances, it would be in what appears to be the more difficult part of the bracket, lined up against Brazil or Mexico in the quarter-finals, then France, Argentina, Uruguay or Portugal in the semis.

In its first World Cup in the post-Zlatan Ibrahimovic era, Sweden is looking to get past the round of 16 for the first time since finishing third in 1994. Swedish midfielder Sebastian Larsson is suspended, as are Swiss defenders Stephan Lichtsteiner and Fabian Schar. Switzerland is led by midfielders Xherdan Shaqiri and Granit Xhaka.

Harry Kane, whose five goals lead the World Cup, heads a young England team that finished group play without a shutout for the first time. Los Cafeteros, led by James Rodriguez and Radamel Falcao, advanced over Senegal on a fair-play tiebreaker based on fewer yellow cards and were the only team to reach the round of 16 after losing their opener. Rodriguez’s calf injury is a concern after it forced him out in the first half Thursday. By losing to Belgium, England faces what appears to be an easier path: Sweden or Switzerland in the quarter-finals, and Spain, Russia, Croatia or Denmark in the semis. 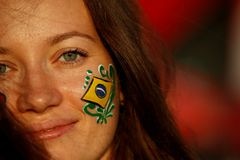 Opinion
There is something Freudian about Germany’s unprecedented collapse at the World Cup
June 27, 2018 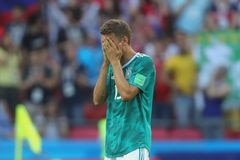 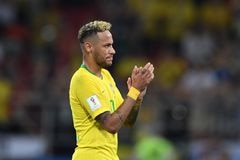