A gruelling stretch for the Vancouver Whitecaps has resulted in some injuries, but players say it also has created a closer-knit squad.

The Whitecaps (3-6-5) will play their sixth of seven games this month when they host FC Dallas (5-5-3) on Saturday.

On Thursday, the team returned from a two-game road swing where they picked up draws against both the New York Red Bulls and Sporting Kansas City, but also saw key pieces like centre back Doneil Henry fall to injury.

The ‘Caps also faced an unexpected travel snafu when their flight from Kansas was delayed by hours, forcing the club to book a late-night charter in order to make their game against the Red Bulls.

For coach Marc Dos Santos, the road trip was a lesson about the “fantastic group of guys” who make up his team.

“The base of this team is exactly where I want it to be,” he said. “Of course you want to get better with pieces and we’re always attentive to that, but we have to make sure that the guys that join the Whitecaps are not only good players, but also fit into the mentality that we have here. Because it’s an incredible mentality.”

The recent trials and tribulations have forced ‘Caps staff to juggle the lineup and some players to take on new roles.

Canadian centre back Derek Cornelius stepped up in Kansas City, scoring a goal in injury time to secure a point for Vancouver. He then slotted into the starting 11 against the Red Bulls on Wednesday.

The Whitecaps’ back end has contributed consistent goals this season, but Dos Santos isn’t making much of the trend.

“For me, offence on a soccer team is the ball going in the goal. And I really don’t care who scores,” the coach said. “The important thing is as a team is just that you get the ball in. And it’s great just to count on everybody. ... At the end, the team is about us, it’s about a collective, it’s about everybody contributing.”

Despite a hectic schedule, some tough travel and a spate of recent injuries, the Whitecaps have come back from a slow start to the season to find success against some of Major League Soccer’s toughest teams.

Vancouver has taken points from five of its last six contests, including a 1-0 victory over the Portland Timbers earlier this month.

“I don’t think the standings quite show where we are as a club, but I can tell you that we are growing. Our goal is to be in playoffs and we’ve set that line and we want to be above that line at the end of the season.”

FC Dallas posted a strong start to the season but has struggled recently, going winless in their last five matchups.

“To say Dallas is coming with five games without a win, we don’t care about that. We respect them a lot,” he said. “They have good players with their team and we just hope that we’re going to show up again and be ready for the game.”

The Whitecaps have fought many tight battles this season, with only one game having been decided by more than a single goal. Vancouver’s 2-0 loss to the L.A. Galaxy on April 5 marks the only contest that wasn’t a draw or a one-goal win.

FC Dallas will be without defender Matt Hedges as he serves a red-card suspension. Vancouver will miss centre back Doneil Henry, striker Joaquin Ardaiz and winger Lass Bangoura, all to injuries.

Dallas ‘keeper Jesse Gonzalez turns 24 on Saturday. The native of Edenton, N.C., has a 5-4-3 record this season.

Montero scores on penalty kick as Whitecaps earn draw against Red Bulls
May 22, 2019 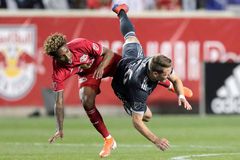