There was a time in the not-so-distant past when almost every young soccer player in this country had to make a choice when they took to the pitch, the playground or the street in front of their house.

Did they want to be Lionel Messi or Cristiano Ronaldo? Barcelona’s No. 10 or Portugal’s CR7?

From Pele to Maradona and on to the current generation of strikers, playing up front has always been en vogue, and for the next generation of soccer stars, setting up shop around the opposition goal is traditionally where it’s at.

But after seeing Edmonton’s Alphonso Davies slice through half of Barca’s team to serve up a goal on a silver platter back in August, young Canadians may well start leaning toward playing full back – one of the sport’s less-glamorous positions.

Even with outstanding role models, it can still be a tough sell, though. Just ask Auro Alvaro da Cruz Jr.

“Kids will always want to be attackers and score because they want to be near the goal,” the Toronto FC full back says through a translator.

“And scoring goals is the most important thing in the game.”

Despite forging a reputation as one of the most reliable full backs in Major League Soccer – which includes being chosen the best right back in the league in 2019 – the 24-year-old Brazilian is no different.

Having started as a midfielder as a youth, he filled in at right back for a few games, but performed so well that the position stuck. With his success in the role, he graduated to the first team at Sao Paulo FC, the club with which he made his debut in 2014 alongside former FIFA world player of the year, Kaka.

But Auro Jr., as he is known, still has designs on moving further up the pitch, and maybe end his wait for a first professional goal.

“As a position, I think it’s hard,” he says of playing full back. “In a few years I want to play as a midfielder again and be nearer the opposition goal.”

That transition would allow him to follow in the footsteps of his idol, Dani Alves, a onetime star right back for Barcelona and Brazil, but who now wears the No. 10 shirt as an attacking midfielder for Sao Paulo.

Alves followed in a long line of legendary Brazilian full backs, from Carlos Alberto of the fabled 1970 World Cup-winning team, to more recent standouts such as Roberto Carlos and Cafu.

But the latter pair’s heyday, including their performances as part of Brazil’s most recent World Cup success in 2002, came a little too late to really light a fire under Auro.

“Cafu, I saw him but I was too young and he was almost retired,” he says. “For my generation, it’s Daniel Alves and [Real Madrid left back] Marcelo. When I changed my position, I started to look to Daniel Alves and look at him as a mirror.”

TFC head coach Greg Vanney might take some convincing, though. With the team top of the MLS standing and the first team to clinch a playoff spot, Toronto is performing like a well-oiled machine. It has eked out results when thoroughly outplayed, such as last month’s win over New York City FC, as well as registering statement victories against the other contenders in the Eastern Conference, such as Philadelphia and Columbus.

Key to that success has been the seamless ability to move players in and out of the lineup.

Auro was recently forced to sit out four games with an ankle injury, but Richie Laryea filled in admirably at right back, winning MLS player-of-the-week honours at one point and ensuring TFC didn’t miss a beat. And with both in the starting lineup on Wednesday, the pair even switched wings midway through the first half of the 1-1 tie with the New York Red Bulls.

Rather than worry about competition for places, Auro welcomes the strength in depth.

“He’s playing really well,” he says of Laryea. “With that the team and the group gains more because we know every moment we need to replace each other we have good players.”

It’s that kind of versatility that has TFC players eyeing a repeat of their 2017 season, when they captured the treble of Supporters' Shield as regular-season champions, MLS Cup and Canadian Championship.

While Auro just missed out on that historic campaign, joining the club on loan in 2018, he says no one in the TFC camp is shocked at the way this season has gone.

“I am not surprised and I don’t think my teammates are surprised about our position either,” he says. “We know our potential. We know we can be champions. We have a chance to play with any team in the league.”

That the team’s rise to the league summit is occurring while it is currently playing out of Pratt & Whitney Stadium in East Hartford, Conn., just throws another wrinkle into this strangest of soccer seasons. With his native Brazil currently one of the countries hardest-hit by COVID-19, with more than five million cases since the pandemic began, focusing on soccer has been tough at times for Auro.

He phones his parents both morning and night, but is thankful that his hometown of Jau, some three hours from Sao Paulo, is far from some of the more concentrated areas.

“I know that everything is really hard in Brazil right now because of the quantity of cases,” he says. “[Last week] my best friend’s mom died of COVID. It’s complicated, but we can’t do anything with this virus.”

Although he only anticipated being in Canada one year – “In my mind it would be one season and then I would go back to Brazil” – Auro has found happiness with both his team and adopted country.

He is still surprised at some of the temperatures he has to play in at times, along with the occasional need to play with gloves and undershirts, and still flees the country as soon as the season is over each December to head south for the Brazilian summer.

And while he likens the game here to a “chess game,” where tactics take precedence over a greater emphasis on individuality that he grew up with, he is open to staying and extending his contract for a few more years.

The current success of the team can only help. Wednesday’s draw meant TFC’s five-game win streak ended, one short of the franchise record. But the team is unbeaten in eight, and with five games remaining in the regular season, it will be confident of getting back to winning ways on Sunday against Atlanta United, which is in 10th place in the East.

“This is the Brazilian way, play happy and start the game confident in yourself,” he says. “All Brazilians have this confident way.” 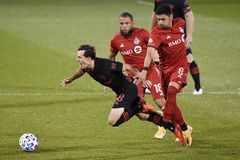 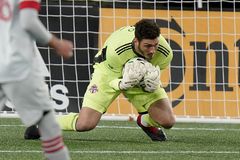 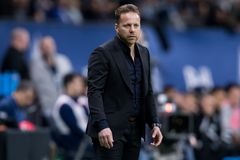