But at least England striker Kane has a golden chance to move high up on the list of scoring greats, with potentially three games left to add to his tournament-leading tally of six in Russia. A goal against Sweden in England’s quarter-final match on Saturday would move Kane level with Grzegorz Lato, the Polish striker who bagged seven in as many games in 1974.

After ‘74, no player produced more than six goals until the great Ronaldo scored eight in seven games, leading Brazil to World Cup glory in 2002.

No player has managed more than six since then, either.

While Kane could possibly equal Gerd Mueller’s tally of 10 for West Germany in 1970, Fontaine’s mythical mark looks untouchable for another four years.

It was perhaps briefly under threat, after Cristiano Ronaldo scored four goals in his first two games in Russia. When Ronaldo scored his fourth goal of the tournament, just four minutes into the second group game against Morocco, a huge personal haul seemed possible with Iran up next.

But the five-time world player of the year – Europe’s career international leading scorer with 85 – failed to score again as the European champions went out in the round of 16.

Fontaine scored his 13 in just six games for semi-finalist France at the 1958 World Cup in Sweden. Even in grainy videos of old, his blistering pace is apparent – something he shared with the Ronaldos, more than with Kane.

While a graceful 17-year-old Pele stole the headlines for World Cup winner Brazil in ‘58, Fontaine emerged as a ruthless finisher. Over all that year, Fontaine scored an astonishing 18 goals in 12 games for France.

His feat was made even more remarkable considering he’d had a knee operation late the year before – in an era when sports medicine was far less advanced than now – and began playing again only four months before the World Cup.

“By the time June came around, I was walking on water,” the 84-year-old Fontaine once said in an interview with FIFA. “Like Jesus.”

He was not known for his modesty. But such bragging masked deep and painful frustration.

Fontaine’s career was brutally halted in its prime by a double fracture of his left leg, in early 1960. The sound of Fontaine’s snapping bones was so brutally loud, France goalkeeper Dominique Colonna claimed he heard it from the other end of the pitch.

Fontaine came back, and kept scoring, though not so much. Two years later, a month short of his 29th birthday, he retired. His trademark pace had gone and a dream move to Spain – possibly to play alongside Hungarian star Ferenc Puskas at Real Madrid – was cruelly ended.

Fontaine’s over all tally of 30 goals is dwarfed by Ronaldo’s 85 and Lionel Messi’s 65 for Argentina, but the fact Fontaine scored 30 in only 21 games underlines how prolific he was.

Aside from Mueller, only one other player has come close to 13 at a World Cup: Sandor Kocsis in 1954.

Kocsis scored 11 in five games, an even more astonishing feat considering the more illustrious Puskas was the star of Hungary’s Mighty Magyars. Puskas had exquisite close control, honing it by juggling a bar of soap in the dressing-room shower on his left foot.

Puskas once scored a corner directly from the left: Whipping the ball with incredible power with the outside of his left foot, the ball swerving over the goalkeeper and into the opposite, top right corner. Incredibly, he did this from a standing position – with no run up – the ball’s vicious velocity generated only by his technique.

While Fontaine’s record might never be beaten, Kocsis was actually more prolific at the World Cup.

Neither earned anything like the riches of today’s stars.

But Fontaine’s top-scorer prize in ‘58 was somehow more appropriate: A hunter’s rifle. 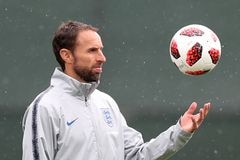 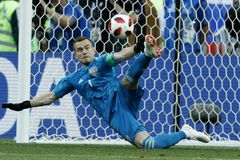 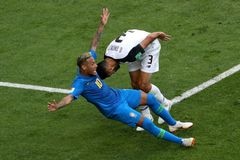