As much as his lingering doubts want to convince him otherwise, Adrian Hanauer knows what’s about to take place Sunday and the numbers aren’t lies.

Hanauer is the majority owner of the popular Seattle Sounders, but sometimes can’t let go of his early struggles with the club. That was back in the early 2000s, when the Sounders were playing in a second-tier league before mostly empty seats and Hanauer would find himself driving around practically begging fans to show up.

So, he might be excused for struggling to fully grasp that his team will be playing for a Major League Soccer title in its home stadium for the first time when the Sounders face Toronto FC in the MLS Cup final. More than 69,000 fans are expected Sunday. Tickets sold out in a matter of minutes, and prices on the secondary market are rivaling those normally associated with championship games in bigger sports leagues.

“My friends know that every game I stand on the field or sit in the stands wondering if this is the game where people will stop going, stop showing up,” said Hanauer, whose team won its only MLS Cup title on the road in 2016. “It’s probably that a little bit of that sense of paranoia is one of the qualities in me that helps me push and drive and hopefully strive for success and excellence.

“But to see the response, I didn’t know whether we’d sell out, whether we’d be trying to sell the last few tickets later this week or whether it would sell out immediately. I just didn’t have a sense for it. So, to see the overwhelming demand is definitely a testament to what the Sounders mean in the community.”

Long considered one of soccer’s hotbeds in North America, the stage is all Seattle’s for this week. It’s the culmination of an unexpected playoff run by the Sounders, some luck on the other side of the playoff bracket and a reward for a franchise whose arrival a decade ago changed expectations for the MLS.

It’s not as straightforward as saying there was MLS before and after Seattle joined. But the Sounders’ arrival heralded a change that now has cities fighting to join the league, which could announce its 30th team by the end of the year with an expansion price tag close to US$300-million.

When Seattle joined as the 15th team, the expansion fee was US$30-million. All the success the league has seen in places such as Portland, Oregon, Los Angeles, Atlanta and Cincinnati as part of its growth over the past 10 years has at least some connection to the success in Seattle.

“I don’t think it’s overstated to say that when Seattle came into the league in 2009 it totally repositioned Major League Soccer, both domestically and internationally,” MLS Commissioner Don Garber said. “And it showed the major sports world here in the U.S., and it showed the global football world, that the U.S. really understands the game, is passionate about it and will support it at levels that prior to them coming on board was unprecedented.”

What’s made Seattle stand out has been the ability to sustain roughly the same level of interest and success for a decade. The Sounders have made the MLS playoffs for all 11 seasons. They tapped into a soccer-crazed fan base and set benchmarks for attendance that only Atlanta has surpassed.

Now, Seattle gets to host the final with the home team playing for the trophy. Seattle hosted the final in 2009 when it was still held at a neutral site, and the 46,000 who showed up that chilly night watched Real Salt Lake win the title over the L.A. Galaxy in a penalty shootout.

This Sunday, the spectators in attendance will be fully invested, the vast majority wearing the Sounders’ green, with a bit of Toronto red scattered about.

“It’s really going to show MLS and the rest of the sports community in America just what this means to this city and we’re all excited,” said former U.S. and Sounders goalkeeper Kasey Keller.

The opportunity to play host to this final is perhaps most special to Hanauer and coach Brian Schmetzer, both Seattle-area natives. Schmetzer played for the NASL version of the Sounders in the early 1980s before that league folded and he coached that team in the early 2000s. Each has been part of the heart of Seattle’s soccer community.

“It’s massive. I tell people I skipped school when the Sonics had their parade and the Seahawks, celebrating them. Being a Seattle guy I’m really proud of what the organization has accomplished,” Schmetzer said. “You look back into the [1980s; we had success back then. ... This history has a long tradition of being a successful franchise and this right now is a pretty high point for all of us that put in some of that work back in the seventies, eighties.”

MLS Cup final will be Michael Bradley’s 200th game with Toronto FC – but will it be his last?
Subscriber content
November 7, 2019 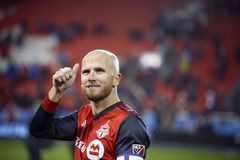 No bad blood as Toronto and Seattle gear up for MLS Cup final
November 8, 2019 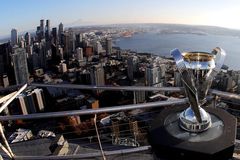