His goals spoke for themselves. But Jozy Altidore really endeared himself to Toronto FC supporters fans in an epic speech after the team’s 2017 MLS Cup parade.

“I just want to let you guys know that I’ve been partying since Saturday. ... And baby, I’m TFC ‘til I die,” the burly forward, clearly feeling no pain two days later, said after a short but passionate homage to Toronto fans at the Nathan Phillips Square celebration.

Altidore dropped the microphone and then started dancing with his teammates.

The 29-year-old U.S. international took a major step toward that commitment Thursday with news that he had signed a three-year contract extension that will keep him in Toronto through the 2022 season.

Altidore’s decision to stay is welcome news after the sudden, unexpected departures of Italian star Sebastian Giovinco and Spanish playmaker Victor Vazquez, who combined for 45 goals and 46 assists over the past two seasons.

Altidore, who has 60 goals and 20 assists in 114 appearances for Toronto in all competitions, becomes the face of the franchise. He ranks second to Giovinco on TFC’s all-time goal-scoring list and stands eighth on the all-time combined appearances list with 114.

A two-time MLS all-star, he is one of nine players to have made at least 100 appearances for the club.

While injuries restricted Altidore to just 13 regular-season games last season, he has a history of coming through for the club when it mattered.

Despite limping on a bum ankle, he scored the decisive goal against Columbus Crew SC in Game 2 of the 2017 Eastern Conference final to send Toronto to the MLS Cup final. Then he scored the winner against Seattle to hoist the trophy at BMO Field.

In the 2016 Eastern Conference final, with Toronto trailing 3-2 after the first leg in Montreal, Altidore’s elegant header off a Giovinco corner tied the aggregate at 4-4. It was his fifth straight playoff game with a goal, an MLS record in a single postseason.

And then in the 100th minute, after a spectacular piece of hold-up play, he fed Tosaint Ricketts for the insurance goal in a 5-2 win that gave Toronto a 7-5 comeback aggregate victory.

Altidore came within a whisker of scoring in the 2016 MLS Cup final, only to see Seattle goalkeeper Stefan Frei pull off a remarkable save to keep it scoreless. Seattle then won via penalty shootout.

Last July, he scored in a 3-0 win over visiting Chicago. In a disappointing league campaign, it was a rare reminder of the 2017 championship season. Altidore, who had played just five games in a season interrupted by foot surgery, celebrated by taking off his orange boot and pretending to use it as a phone.

“I was answering the call, man,” he explained later. “Sometimes when your city calls, you’ve got to pick up the phone.”

On Thursday, dressed in a stylish dark suit and wearing a glittering watch that looked like it came with its own limousine rather than a box, he extended his calling plan.

Altidore underwent ankle surgery at the end of last season and has been dealing with some unrelated knee irritation. He said he hopes to see action in the home opener March 17 against New England.

TFC opens the season Saturday in Philadelphia and then has a bye week.

A physical specimen, Altidore can be a bull in a china shop who can cause defenders fits while making room for his teammates. But he also has a delicate touch.

Reporters who cover the team know the quickest way to have Altidore shut down is to ask him about himself. But quiz him on a teammate and he is only too happy to respond.

Away from the field he has a young son and is in a relationship with U.S. tennis star Sloane Stephens, currently ranked fourth in the WTA. Given his new deal and her career earnings of US$13.6-million, they truly are a power couple.

Stephens tweeted a picture of her and the youngster celebrating after the deal was announced Thursday.

“Congratulations baby, we love you JozyAltidore ! Here’s to more years of cheering you on, making memories and keeping the 6ix on a wave. You’re amazing and you make us so proud!” she tweeted.

While Giovinco’s contract talks went south quickly, team president Bill Manning said he saw all the right signs during a coffee meeting with Altidore at training camp in California.

“For me, that’s really what put it over the top,” Manning said. “Because I saw the hunger in his eyes and how much he loved it here. And he was willing to work with us [on the contract] and once we kind of talked that through, we were able to create a contract that made sense for us and made sense for him.

“So I just think it’s an extremely important day for us to turn the chapter on this off-season and to go forward, especially with the next guy we have coming in.”

That would be Alejandro Pozuelo, the Spanish attacking midfielder who is expected to join Toronto from KRC Genk in mid-March as a designated player.

“His salary’s going to be different. It’s still going to be amongst the highest in the league,” he said.

Altidore ranked seventh in the league last season with total compensation of US$5-million, according to the MLS Players Association. Giovinco was No. 1 at US$7.115-million, ahead of captain Michael Bradley at US$6.5-million.

Bradley’s contract, which expires at the end of 2019, is next on the to-do list. He says talks will go on behind the scenes, so there are no distractions.

Giovinco, who was entering the last year of his contract, was unable to come to terms with Toronto and left for Saudi Arabia’s Al-Hilal FC. Vazquez, who is 32 like Giovinco, went to Qatar’s Al-Arabi SC.

Adding to the pain was being bundled out of the CONCACAF Champions League by Panama’s Club Atletico Independiente de la Chorrera at the first hurdle.

Growing up in Florida, an eight-year-old Altidore was spotted playing by Josef Schulz, a former pro player who ran his own soccer camp. Schulz told Altidore’s father his young son could become a world-class player.

A 16-year-old Altidore was drafted in the second round (17th over all) by the MetroStars (now New York Red Bulls) in the 2006 MLS SuperDraft. He wears No. 17 as a result of where he went in the draft.

He spent two seasons in MLS before joining Spain’s Villarreal CF in June, 2008. He went on to play for England’s Hull City, Turkey’s Buraspor and AZ Alkmaar of the Netherlands before an ill-fated move to England’s Sunderland in July 2013. He joined Toronto in January, 2015.

On the international scene, Altidore has scored 41 goals in 110 games for the United States. 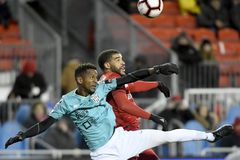 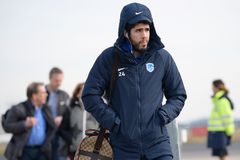 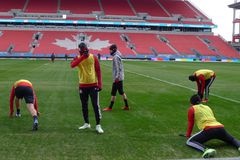