A combination of goalkeeping errors and penalties earned Liverpool a return to the Premier League summit and Brighton a place in the FA Cup semi-finals on Sunday.

James Milner converted an 81st-minute spot kick — after two mistakes in a matter of seconds by Fulham goalkeeper Sergio Rico — to secure a 2-1 win for Liverpool at Craven Cottage, lifting the Reds above Manchester City and two points clear in the title race.

City has a game in hand in its quest for an unprecedented quadruple. Pep Guardiola’s side has already won the English League Cup, is into the Champions League quarter-finals and now knows it will play Brighton in the last four of the FA Cup.

Brighton only made it to extra time in its quarter-final match against second-tier Millwall by scoring an equalizer in the fifth minute of stoppage time when goalkeeper David Martin allowed a free kick to sail into the corner .

The score stayed 2-2 after extra time and Brighton won the penalty shootout 5-4 to reach the semi-finals for the first time since 1983.

Wolverhampton Wanderers and Watford complete the all-Premier League lineup for the last four, with the semi-final games taking place at Wembley Stadium on April 6 and 7.

In the other Premier League game on Sunday, Chelsea lost 2-0 at Everton and missed a chance to move level on points with fourth-placed Arsenal. Richarlison and Gylfi Sigurdsson, with a penalty, scored for Everton.

Mohamed Salah’s goal drought extended to seven games in all competitions in another frustrating display by the Egypt forward at Fulham.

Luckily, Liverpool has Sadio Mane in the form of his life.

The Senegal international made it 11 goals in his past 11 games by putting Liverpool ahead at Craven Cottage. He now has 17 league goals for the season, the same as Salah and just one behind Manchester City striker Sergio Aguero — the top scorer.

Mane was also influential in Liverpool’s second goal after he was dragged down by Rico, moments after the goalkeeper failed to hold a weak effort from Salah. Milner calmly floated his penalty down the middle.

Fulham equalized against the run of play through former Liverpool forward Ryan Babel, who capitalized on a defensive mix-up between Virgil van Dijk and goalkeeper Alisson Becker. Babel nipped in as Alisson failed to collect Van Dijk’s header back and tapped into an empty net.

“I have no doubt about my players’ nerves,” Liverpool manager Juergen Klopp said. "I always want perfection but it’s rare that you get it. People will say we should be more convincing in games like this but this is us, we are in the middle of a development, not at the end.“

Millwall has established a reputation for being a so-called “giant-killer” in the FA Cup in recent years, having reached the final in 2004, the semi-finals in 2013 and beaten five Premier League teams in a row in this competition, including last season, ahead of Brighton’s visit.

If it wasn’t for Martin’s mistake, the team would be back at Wembley.

The goalkeeper should have been able to comfortably collect Solly March’s inswinging free kick, but he inexplicably let the ball go through his grasp and into the top corner off virtually the last kick of regulation time.

“He was outstanding for the whole game, barring one moment,” Millwall manager Neil Harris said of Martin. “That is football.”

Millwall earlier took a 2-0 lead after goals in the 70th and 79th minutes, only for Brighton’s comeback to begin with Juergen Locadia reducing the deficit in the 88th.

Both teams missed a penalty apiece heading into sudden death in the shootout, and Jake Cooper sent his attempt sailing over the crossbar to give Brighton victory.

Chelsea’s best chance of qualifying for next season’s Champions League might yet come via winning the Europa League.

With eight games left in the Premier League, Chelsea is in sixth place after the loss at Goodison Park that didn’t look like coming after the visitors dominated the first half. Eden Hazard sparkled early on, hitting the post with a fierce drive, but faded like his teammates after the break.

Richarlison nodded home from close range in the 49th after Dominic Calvert-Lewin’s header was parried out by Kepa Arrizabalaga at a corner. Richarlison earned the penalty that led to Sigurdsson’s goal in the 72nd, from the rebound after his spot kick was saved by Kepa.

This was a first win for Everton over one of the league’s “Big Six” since beating Manchester City in January, 2017.

Chelsea advanced to the Europa League quarter-finals this week and will next play Slavia Prague. The winners of that competition qualify for the Champions League. 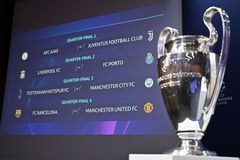 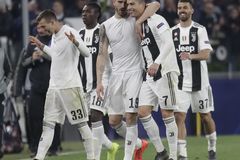 Juventus face mirror-image of themselves against Atletico
March 11, 2019 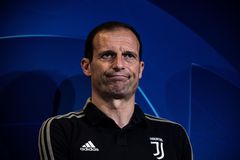