Jude Bellingham scored to put Dortmund on course for an upset win before City hit back through a penalty by Riyad Mahrez and Foden’s goal.

Guardiola reached the semi-finals with City at the fifth attempt, matching the club’s best-ever result under his predecessor Manuel Pellegrini in 2016. Guardiola said Tuesday he expected to be labelled “a failure” if Dortmund became the fourth club in a row to eliminate City in a Champions League quarter-final, after Lyon last year and before that Tottenham and Liverpool. Monaco beat City in the round of 16 in 2017 in Guardiola’s first season.

Manchester City will face Paris Saint-Germain in the semi-final.

In Liverpool, however, the English team took a beating. Real Madrid secured its return to the Champions League semi-finals after a two-season absence by holding Liverpool to a 0-0 draw Wednesday, protecting a 3-1 advantage from the first leg.

Real Madrid will face Chelsea in the other semi-final.

Liverpool created chance after chance, but Mohamed Salah, Roberto Firmino and Sadio Mané could find no way past goalkeeper Thibaut Courtois and a makeshift defence that stifled a front three that has endured a season of frustration.

A scene of many memorable European comebacks, Anfield lacked the fans who have so often inspired Liverpool in similar situations.

The only way Liverpool supporters could make their presence felt was outside the stadium with a red haze of flares greeting the teams before the game – and one of the Madrid buses being hit by an object that smashed a window.

But while the record 13-time European champions can look forward to a semi-final against Chelsea, Liverpool’s last route to a trophy this season has now been shut off.

It’s quite a comedown for Jurgen Klopp’s side, which won the Champions League in 2019 – after losing the 2018 final to Madrid – and ended a 30-year English championship drought by winning the Premier League by an 18-point margin in 2020.

Now, Liverpool is struggling to even make the Champions League places, sitting three points outside the top four with seven games to go.

In Dortmund, Bellingham, the German team’s 17-year-old English midfielder, put Dortmund ahead when he scored in the 15th minute after City defender Ruben Dias blocked Mahmoud Dahoud’s shot. That levelled the aggregate score 2-2, with Dortmund ahead on away goals.

Bellingham became the second-youngest player to score in a Champions League knockout game at 17 years, 289 days. Bojan Krkic was 72 days younger when he scored for Barcelona against Schalke in 2008.

City then laid siege to the Dortmund goal, with Kevin De Bruyne hitting the crossbar. And Dortmund handed City the breakthrough early in the second half when Emre Can gave away a penalty by heading a cross onto his arm. Mahrez put City back in control when he blasted the spot kick into the top right, past stand-in goalkeeper Marwin Hitz.

Chasing another goal to force extra time, Dortmund pushed up, but could only muster an off-target header from Mats Hummels at a free kick. City took advantage of the space that opened up to pressure Dortmund.

Foden, who also scored in the first leg last week, made sure of the win in the 75th with a low shot past Hitz off a short corner routine. He ran straight to Guardiola on the touchline to celebrate with a hug.

The loss means Dortmund could face an exodus of talented young players at the end of the season. Part of the appeal to talents such as striker Erling Haaland and forward Jadon Sancho – the latter injured for this game – has been Dortmund’s consistent Champions League appearances as a way to develop their skills and show off to potential buyers. With Dortmund sitting fifth in the Bundesliga, it’s on course for the far less appealling Europa League. 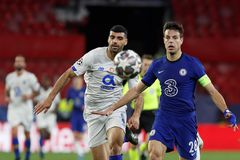 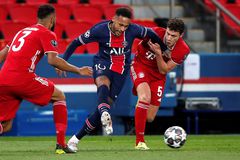 Toronto FC gets vaccine boost but injury list still an issue ahead of Leon rematch
April 13, 2021 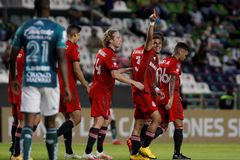