“Ole’s at the wheel,” the United faithful chant about their new manager. “Tell me how good does it feel.”

Much, much better than it did under Jose Mourinho.

The cloud over England’s biggest soccer club has been lifted since United fired Mourinho, perhaps its most divisive manager ever, last month and replaced him with its former striker from Norway.

The effect: United has won five straight matches — four in the Premier League and another in the FA Cup — and scored 16 goals in the process.

The team and the fans have their swagger back. Where Mourinho scowled, Solskjaer smiles. Marquee players Paul Pogba and Alexis Sanchez, shunned by Mourinho, already look revitalized under Solskjaer.

So how has the man once known at United as the “Baby-faced Assassin” because of his boyish looks and ruthlessness in front of goal masterminded such a rapid turnaround of fortunes at the club?

The charm offensive began immediately, although it just feels natural with Solskjaer.

On his first day in his dream job, he made an early-morning arrival at United’s training ground and gave a bar of Norwegian chocolate to the receptionist , Kath, who was working at the club throughout his time there as a player.

In many ways, Solskjaer accepted a daunting task when approached by vice executive chairman Ed Woodward to take over from Mourinho. United was sixth in the Premier League, 19 points off the lead and 11 adrift of the Champions League qualification positions, after its worst start to a top-flight season. Its squad looked lopsided, the dressing room fractured.

Yet he has taken to one of the most pressure-filled positions in world soccer with ease. Always smiling, always with a cheerful disposition. Just simply enjoying himself.

“They are good players and it’s up to them to use their imagination, creativity and just enjoy playing for this club,” Solskjaer said, “because that’s the best time of your life.”

That positivity and joyfulness has been reflected on the field.

Defensive and cautious under the pragmatic Mourinho, United is playing with more freedom now and more akin to its traditions of attacking soccer.

Right from Solskjaer’s first match in charge — a 5-1 win at Cardiff — everything about United’s play has been forward-looking. The midfielders and wingers appear to be playing 20 yards further upfield and there is less fear about conceding a goal.

“It’s about us. It’s about Man United,” Solskjaer said. “We want to see them express themselves.”

No player has benefited more from the change of managers than Paul Pogba, the World Cup winner from France who joined United for $116 million in 2016 as the world’s most expensive player.

Pogba’s relationship with Mourinho had broken down to the extent that he was dropped from the team for Mourinho’s final matches in charge.

Solskjaer had previously said he would build United’s team around Pogba, who he coached with the club’s reserve team a decade ago, if he ever became manager. He has been true to his word, with Pogba playing a central role in United’s recovery.

He scored four goals and set up three more in Solskjaer’s first three games, and had more passes and shots on target than any other United player in those matches.

Another player who appeared to have fallen out with Mourinho, Alexis Sanchez, has set up two goals in two matches under Solskjaer since returning from injury, and is being seen like a new signing after struggling since joining from Arrsenal last January.

Marcus Rashford and Romelu Lukaku, the two strikers in United’s squad, have hit the ground running under Solskjaer.

The 21-year-old Rashford has scored in three of the four league games, giving United a new dimension with his pace and directness up front. He already seems to be a favourite of Solskjaer, who talks excitedly of the England international’s talent and potential.

Lukaku has responded well to Rashford’s challenge, scoring in all three games he has played — twice within minutes of coming on a substitute against Bournemouth and Newcastle. Solskjaer was known as a so-called “super-sub” because of his goal-scoring exploits off the bench and Lukaku is playing in his new manager’s image.

Not just that, but Lukaku is playing a different way, stretching defences and playing on the shoulder of the last defender instead of dropping deeper to link up play. That is surely the Solskjaer effect.

Solskjaer is learning from — and leaning on — the best while reviving a sleeping giant.

Alex Ferguson, the great United manager from 1986-2013, is being regularly contacted by Solskjaer and has been at one of the team’s training sessions. It was the first time he had attended United’s training ground since suffering a brain hemorrhage in May.

“He had a few nice chats with the staff and he encouraged us,” Solskjaer said.

Ferguson signed Solskjaer from Norwegian club Molde in 1996 and has been the biggest single influence on his career, with Solskjaer saying “loads of my management revolves around what I learned from him.”

Solskjaer’s preferred style of play certainly revives memories of the Ferguson era. As does the frequent sight of him chewing gum on the sideline.

The reality is that Solskjaer couldn’t have picked a better time to start his interim tenure.

Cardiff (5-1), Huddersfield (3-1) and Bournemouth (4-1) were three of the weakest teams in the Premier League, while a home match against struggling second-tier team Reading (2-0) in the FA Cup also offered an easy route to the fourth round.

Solskjaer’s biggest test so far was the match at Newcastle, which United won 2-0 but only through goals in the final half-hour from Lukaku and Rashford.

Still, the true measure of United’s progress will come on Sunday when United travels to plays title contender Tottenham.

With a victory at Wembley Stadium, there will be no doubt that United is onto a winner with Solskjaer and may keep its former striker on beyond this season. 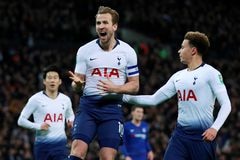 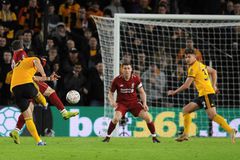 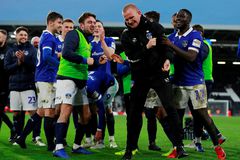