The U.S. men’s soccer players showed how far, far behind they are the women.

Hours after the American women won their fourth World Cup, the men were outplayed by Mexico in the CONCACAF Gold Cup final. Jonathan Dos Santos scored in the 73rd minute to give the El Tri a 1-0 victory Sunday night.

Star Christian Pulisic and captain Weston McKennie both left Soldier Field without speaking to reporters about the latest setback to a program still trying to rebound from its failure to qualify for last year’s World Cup.

“Over the course of 90 minutes, Mexico was the better team,” Gregg Berhalter said after his first tournament as U.S. coach. “What we lacked was I think some of the calmness, some of the composure.”

Despite missing their top three forwards, El Tri had 58% possession, outshot the U.S. 20-10 and won their eighth Gold Cup title to six for the U.S., which dropped to 1-5 in Gold Cup finals against its biggest rival.

Days before he reports to Chelsea, Pulisic was by far the best U.S. player, using bursts of speed and cutting ability to create chances, but he rarely touched the ball in the second half. The 20-year-old midfielder was given the tournament’s best young player award after scoring three goals with three assists.

“His contribution to the team this tournament was fantastic,” Berhalter said. “Both sides of the ball. Off the field.”

McKennie, coming off an excellent season with Schalke in the Bundesliga, was given the captain’s arm band for the first time but was largely ineffective.

“I’m not going to comment on his individual performance,” said Berhalter, who also praised McKennie for his play earlier in the tournament.

While the crowd in Lyon, France, was overwhelmingly pro-American as the U.S. beat the Netherlands 2-0 earlier in the day, El Tri supporters in green, white and red in the crowd of 62,493 made Solider Field seem like Mexico City’s Estadio Azteca. Whenever American Zack Steffen took a goal kick, there were loud chants of “puto,” an anti-gay slur Mexican fans repeatedly have been admonished for.

Mexico scored on a move started by Dos Santos, who plays in Major League Soccer for the LA Galaxy. He passed the ball to Rodolfo Pizarro, who switched from the left flank to the right in the second half. Pizarro crossed in the penalty area where Raúl Jiménez played a back-heel pass to Dos Santos, who had continued his run. His left-footed shot went by the outstretched arm of Steffen for just his third goal in 46 international appearances.

“We couldn’t quite find the first pass to get out in certain moments,” midfielder Michael Bradley said. “Obviously then you get a little bit tired, and they start to gain some momentum, obviously. It culminates with them getting them the goal.”

Bradley was among four holdovers in the starting lineup from the 11 who began the October 2017 loss at Trinidad and Tobago that cost the U.S. a World Cup berth, joined by Pulisic, midfielder Paul Arriola and forward Jozy Altidore.

Altidore scuffed an open left-footed shot from 10 yards in the seventh minute. Jordan Morris beat goalkeeper Guillermo Ochoa with a 6-yard header from Pulisic’s corner kick in the 51st minute, but Andrés Guardado headed the ball away at the goal-line. Second-half sub Cristian Roldan’s point-blank shot hit Héctor Moreno on the head and bounced away in the 87th.

“We just couldn’t put our chances away tonight,” Altidore said. “If you look at that 10-, 15-minute period, we kind of lost the game a bit. We were trying to play out of the back and stick to our guns, but maybe it was a time to kind of get up the field and try to get in their half and kind of change that momentum a bit.’

Mexico was playing in its first tournament under new coach Tata Martino. El Tri has not lost a competitive match to the U.S. since 2013, winning three, drawing one and re-establishing itself as the region’s power.

Berhalter, the first American to coach the national team after playing in the World Cup for the U.S., wants a possession-based team. Qualifying for the 2022 World Cup will not start until next summer, leaving the biennial championship of North and Central America and the Caribbean as the first measuring test. 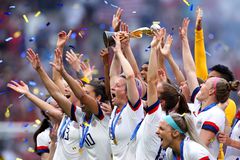 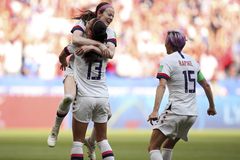