Substitutes Yordy Reyna and Cristian Dajome scored second-half goals after a lengthy weather delay Thursday as the depleted Vancouver Whitecaps conjured up an unlikely 2-0 victory over Chicago Fire SC to advance at the MLS is Back Tournament.

The Whitecaps, who had lost their first two matches, needed to win by two goals or more to leapfrog Chicago on goal difference in Group B and move on to the round of 16 as one of the four best third-place finishers.

The Fire briefly had a lifeline in the 84th minute when C.J. Sapong knocked the ball in after Alvaro Medran’s shot hammered off the crossbar. But, after video review, the goal was waved off for handball.

Chicago had just needed a win to move past Seattle into second place but could still have advanced with a tie or even a one-goal loss in which it scored at least once.

San Jose had already clinched top spot in the group.

Vancouver looked anything but threatening for the first hour Thursday. Then, with the game scoreless 0-0 in the 63rd minute, the game was halted for 90 minutes as lightning threatened ESPN’s Wide World of Sports complex.

A different Whitecaps team came out from the dressing room.

Less than two minutes after play resumed, Reyna broke the deadlock. Ali Adnan found Reyna behind the defence and the Peruvian international sidestepped goalkeeper Kenneth Kronholm before slipping the ball in. It was Vancouver’s first shot on target.

Dajome made it 2-0 in the 71st as the Chicago defence was carved open again. Reyna found Dajome, who slotted the ball past Kronholm with his team’s second shot on net.

Slovenian international Robert Beric had a gilt-edged chance for Chicago in the 78th minute but skied the ball from right in front on goal.

Playing their third games in eight days, the Whitecaps had shown little in the first half, outclassed and outshot 10-1 (3-0 in shots on target). Already missing nine players through injury or other reasons, Vancouver lost defender Jasser Khmiri late in the first half with a left knee injury after going down in a tangle with a Fire player near the sideline.

Vancouver coach Marc Dos Santos switched from a 4-4-2 formation to 5-3-2 with five Canadians in his starting 11, including forwards Ryan Raposo and Theo Bair. It marked the first MLS start for Raposo, a 21-year-old rookie from Hamilton.

Third-string goalkeeper Thomas Hasal, a 21-year-old from Saskatoon, also made his first MLS start in place of the injured Maxime Crepeau. Hasal saw his first MLS minutes in relief Sunday when Crepeau broke his thumb in a goalmouth collision in the Cap’s 3-0 loss to Seattle.

Backup ‘keeper Bryan Meredith left the team earlier in the tournament after the death of his mother.

Crepeau watched the game from the sidelines, his arm in a sling. Jonathan Sirois, a 19-year-old on a one-day loan from the Montreal Impact, was Hasal’s backup on Vancouver’s nine-man bench.

Vancouver had a shaky start with Teibert having to make an acrobatic goal-line clearance of a header off a corner in the third minute. Beric shot just wide in the 10th minute.

Hasal missed the ball when he came flying out of the box in the 24th minute but was saved by both a covering defender and the offside flag.

Chicago had piled up five corners and outshot Vancouver 9-0 (3-0 in shots on target) by the first hydration break 32 minutes into the half.

One minute after Vancouver’s first attempt at goal — Hwang In-Beom’s 41st-minute shot flew well over the crossbar — Hasal made a fine diving stop to deflect a low Jonathan Bornstein shot.

Chicago had 59 per cent possession in the first half.

Vancouver was opened up in the 47th minute when Hasal’s throw went straight to a Chicago player. Przemyslaw Frankowski’s ensuing header rattled off the goalpost.

Dajome broke in on goal in the 51st minute but could not keep his feet and went down before taking a shot. At the other end, Chicago kept pressing but could not finish.

Vancouver came to the tournament without forwards Lucas Cavallini, Fredy Montero and Tosaint Ricketts, along with defender Andy Rose and defender/midfielder Georges Mukumbilwa, who all stayed home because of personal or medical reasons.

Group games at the tournament count in the regular-season standings, leaving Vancouver at 2-3-0 and Chicago at 1-3-1.

Montreal Impact advance at MLS is Back Tournament to face Orlando in round of 16
Subscriber content
July 23, 2020 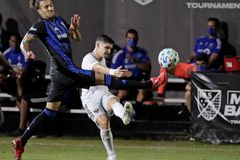 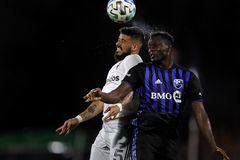 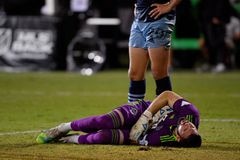