Mohamed Salah has reignited a months-old dispute with soccer authorities in his native Egypt, accusing them of ignoring his complaints about their unauthorized use of his image.

The dispute over image rights and lingering tensions over his treatment during the World Cup have cast doubt on whether Salah, the top scorer in England’s Premier League last season, will continue playing on the national team.

“It’s normal that a football federation seeks to solve the problems of its players so they can feel comfortable. But in fact, what I see is exactly the opposite,” the Liverpool winger tweeted Sunday.

“It is not normal that my messages and my lawyer’s messages are ignored. I do not know why all this (is happening)? Do you not have time to respond to us?!” he added.

Ramy Abbas, Salah’s agent, said he and his client have asked for guarantees regarding the 26-year-old’s “well-being” while on the national team and assurances that his image rights won’t be violated again. “Enough is enough,” Abbas tweeted.

Egypt’s football association said in a statement on Monday it would discuss Salah’s requests. In a press conference later in the day, Ahmed Megahed, a board member of the association, said they contacted Salah on August 16 after he previously sent a message to association’s president Hani Abu Reda on Aug. 11, saying any requests should be sent in an official letter to the association.

He added that Rami Abbas has sent another letter late Sunday after Salah’s tweet, this time without “threats or resignation requests.” He said the association is considering Salah’s requests which include providing him with security when he is with the national team and shielding him from ill-timed requests for photos, press interviews or promotional appearances.

“Some of these demands will be accepted but others not... we fully care about Salah and his performance as he is one of our sons,” Megahed said.

Salah’s tweet was widely shared in Egypt, where he is seen as a national hero.

Egyptian business tycoon Naguib Sawiris called for the resignation of the football association’s board members.

“Treating an Egyptian figure like Mohamed Salah who raised his country’s name in an unprecedented way should not have been like that... Resign and relieve us after the abject failure,” Sawiris tweeted Monday.

The dispute began in April when the Egyptian national team prominently featured Salah’s image on its plane, which was provided by official team sponsor WE. Salah has a sponsorship deal with a rival telecommunications firm, Vodafone.

At the time, Youth and Sports Minister Khaled Abdel-Aziz announced that all of Salah’s demands would be met following an emergency meeting of the football association’s board. Farag Amer, head of parliament’s Youth and Sports committee, said President Abdel-Fattah el-Sissi had ordered that the dispute be quickly resolved.

Salah is due to be back in international action under new coach Javier Aguirre in September, with Egypt facing Niger in a 2019 Africa Cup of Nations qualifier.

But his participation could be in doubt.

Salah’s relationship with the association has been strained since he was apparently used as a political symbol while the World Cup squad was based in Chechnya. In June, two people close to Salah told The Associated Press that the player has been considering retiring from international play.

Salah was said to have been particularly annoyed by a dinner banquet hosted by Ramzan Kadyrov, the ruler of the Russian region of Chechnya, in which he granted the Egyptian “honorary citizenship.”

Salah was criticized in British media after posing for photos with Kadyrov, who has repeatedly been accused of human rights abuses, including torture and the killing of political opponents. Kadyrov denies the allegations.

Fouled, shoved and pushed, Eden Hazard has last laugh for Chelsea in win over Newcastle
August 26, 2018 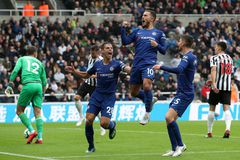 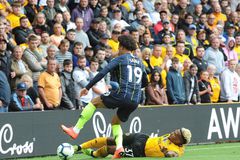 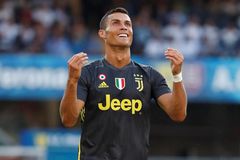