Injuries are piling up for Montreal, and that’s posing a serious challenge for first-year coach Thierry Henry ahead of the Impact’s Major League Soccer season opener.

Henry felt his roster already needed beefing up on the first day of training camp, before those players were injured.

“It would be better if everyone was healthy, if we had a full team,” Henry said before practice on Friday. “But that’s the unpredictability of sport and we need to adapt.

“Over all for me, it’s about what we can do to perform. It’s not going to be easy.”

The injuries on the back line are most troubling, with centre backs Raitala and Camacho out long term. Meanwhile wingers Okwonkwo (glute) and Lappalainen (leg) are day-to-day.

Raitala will miss eight to 12 weeks with a fractured right fibula, the team announced Friday.

The 31-year-old was hurt in the fifth minute of Wednesday’s 0-0 CONCACAF Champions League draw against Costa Rica’s Deportivo Saprissa. The Impact captain stayed in the game until halftime, but did not return for the second half.

“That one hurts,” defender Zachary Brault-Guillard said of losing Raitala. “That’s our captain. He brings so much to this team. He’s always helping the younger players too.”

Meanwhile Camacho is out another three to five weeks with a knee injury sustained in the opening leg of that same Champions League matchup last week.

Camacho will miss at least three MLS matches while Raitala will miss seven. Neither player will dress for Montreal’s Champions League quarter-final against C.D. Honduras next month.

“The upcoming few weeks will not be easy,” added Brault-Guillard, who plays for Canada on the international stage. “We need to remain solid and keep our heads high.”

The Impact did not re-sign veteran defenders Bacary Sagna, Daniel Lovitz and Victor Cabrera in the off-season.

That leaves Henry with six healthy defenders at his disposal: Rod Fanni, Brault-Guillard, Jorge Corrales, Luis Binks, Joel Waterman and Karifa Yao. Only three of them have any MLS experience.

It’s a chance for young centre backs like Binks and Waterman to showcase their talents.

“We still have good defenders in the team,” said Binks, the former Tottenham Hotspur academy player. “It’s a big opportunity now for me to cement my place in the team. But that will only come with playing well and training well.”

Henry said he would like to see additional reinforcements but would not reveal if any signings were in the works. The former Arsenal striker is trying to get Montreal back to the postseason for the first time since 2016.

“Hopefully, but the only thing I can do is coach,” he said. “Whoever I have, that’s what I’m going to try to do. It becomes even more complicated because, at the moment, we’re playing five at the back.

“We have to do our best with what we have. Three years without playoffs, and we haven’t added that many players. We have to fight.”

Henry still needs to decide who will be his main goalkeeper this season. Evan Bush has been the starter since 2014 but 26-year-old Clement Diop could steal the spotlight this year. Diop made both starts in the Champions League this month.

Going into their ninth MLS campaign, the Impact will have to find a way to replace Ignacio Piatti’s goal-scoring prowess. The crafty Argentine playmaker returned to San Lorenzo earlier this month after six seasons with Montreal.

Piatti is the team’s all-time leading goal scorer in all competitions with 78 goals. Henry will look to forwards like Bojan, Maximiliano Urruti and Anthony Jackson-Hamel to fill the void left by his departure.

Midfielder Saphir Taider will also need to step up again after being the leading scorer last season. 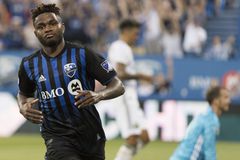