On the list of impressive pageantry at sporting events, few sights are more stirring than Scotland’s supporters on the march. They throng in their thousands, in kilts, and inevitably there’s a bagpiper. They’re happy, some are tipsy and they’re proud. They sing as they march to the stadium: “Hello and welcome/We’re the Tartan Army/ We’re little bit mental/And a little bit barmy.” In the stadium, their mass singing of Loch Lomond could make the hairs on your head stand up.

Tournaments have been deprived of that great spectacle for more than two decades. Scotland stopped qualifying for World Cup or Euro events in 1998. Thus, its presence at Euro 2020 became a very big deal for a small country, one with a shallow pool of talent that, once upon a time, used to compete at the highest level.

Then this: a great, rousing atmosphere in the stadium in Glasgow followed by a frantic, nervous performance by a Scotland team that never looked even close to the Czech Republic in class and sophistication. One goal by the Czechs that should have never happened if the Scottish defence was organized. Then one of the greatest goals ever scored at a Euro, one that left Scotland deflated and simply illuminated the vast gulf in talent on the field. It was a miserable, maddening display by Scotland and, with England and Croatia still to face, all hopes of heroics have evaporated.

Italy’s back and brilliant, so let the good times roll

Scotland could have been the cuddly toy team of this tournament, the underdog team to hug and put your hopes behind. Finland merited that status, never having qualified for a Euro or World Cup. But Finland’s somewhat bizarre victory over Denmark the other day was overshadowed and will forever be asterisked by Christian Eriksen’s cardiac arrest and the game being suspended for 90 minutes.

If you were a neutral you wanted Scotland to be forceful and brave. There’s a way for small countries that lack big talents to steer through a tournament: with guile, guts and concentration. Scotland just barged forward from the start. A shot from John McGinn and runs by Andy Robertson had the crowd roaring loud. But anyone could see it was just frenzy and it was fraught. Players bumped into each other. Two players ran for the same ball. After 25 minutes, captain Robertson was waving his arms at his teammates and you didn’t need to lip-read to understand he was shouting, “Calm down, calm down.”

There wasn’t much calm, careful defending on display, as Scotland then struggled to deal with corner kicks. It was nerve-jangling, agitated defending and then, weirdly, the Scots seemed to switch off completely. Czech Vladimir Coufal cruised through, delivered nicely to Patrik Schick and what looked like an effortless goal was the outcome.

Scotland did rally for a few minutes at the start of the second half. “Scotland are knocking loudly at the door,” said the TV play-by-play chap, accurately. But banging at the door won’t get you inside. You need keys and Scotland had none. Minutes later, Scotland’s defence was utterly exposed. Schick picked up a loose ball near the halfway line and after a mere glance, sent an arching shot that arrowed long and over goalkeeper David Marshall. It was breathtaking, but only underlined Scotland’s ill-discipline and harebrained manoeuvres. The singing stopped, the frowning started in the stands.

Excuses will be made: Schick’s second goal was freakish, a once-in-a-lifetime trick, and the absence of Arsenal defender Kieran Tierney, through injury, removed a reliable, skilled presence at the back. On top of that, Lyndon Dykes had some good goal chances and only needs to settle a bit, while substitute James Forrest made a dazzling run past two defenders and maybe should start the next match.

That’s wishing and hoping, based on this display. You wanted Scotland to be that cuddly toy, underdog team, especially with the next game being the emotional summit against old enemy England. But this was more embarrassing than brave-hearted from Scotland. The Tartan Army deserves better, after a long, long wait for glory, and hoping it will get vastly better is barmy. 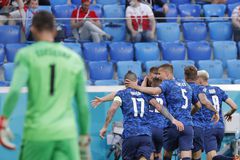 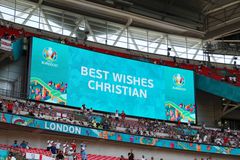 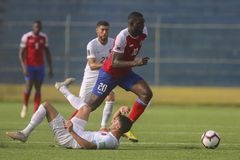