It started in November, 2010, with a meal at Vancouver’s Il Giardino restaurant.

Victor Montagliani, then vice-president of the Canadian Soccer Association, and Peter Montopoli, the association’s general secretary, were sharing a meal with mentor Walter Sieber – director-general of sports at the 1976 Montreal Olympics and a man plugged into the world governing body of soccer.

“We were in the middle of our [2015] Women’s World Cup process bidding and Walter looked at me and said ‘Listen, once you become [CSA] president, I think the time is right for Canada to look at bidding [for the men’s World Cup],’” Montagliani recalled in an interview.

“I looked at Peter at that moment and I said ‘Peter, we’re going to do it and it’s going to part of our [strategic] plan when we launch it after I become president. And this is what we’re going to do,“’ he added. “Peter didn’t say yes or no. He just said it with his eyes – basically saying, ‘Okay, we’re ready to go.“’

Much has changed since that day.

A 32-team affair when Montagliani hatched his plan over pasta, the men’s World Cup has morphed into a 48-country behemoth. Montagliani, subsequently elected to two terms as president of Canada Soccer, has moved up the world soccer ladder to become president of CONCACAF, which covers North and Central America and the Caribbean, and a FIFA vice-president.

But Canada carried through on its World Cup bid, albeit now in conjunction with Mexico and the United States On Wednesday, the three countries will learn whether they have bested underdog Morocco in a vote of 200-plus FIFA members associations at the FIFA Council in Moscow to decide the host of the 2026 World Cup.

The so-called united bid of Canada, Mexico and the United States comes with a budgeted cost of US$2.16-billion revenue – about the value of the New York Mets baseball franchise, according to Forbes magazine. It projects revenue of US$14.3-billion, which is about the same as the annual GDP of Bermuda and the Bahamas combined.

Back in 2010, Sieber had been regaling Montagliani and Montopoli with stories of how Canada had bid for the 1986 World Cup. Originally awarded to Colombia, that competition became in need of a new host when the South American country pulled out in 1982, saying it did not have the economic resources to meet FIFA’s demands.

”I announce to my compatriots that the 1986 world football championship will not be held in Colombia,” Colombian president Belisario Betancur said in making the announcement, according to a New York Times account.

”We have a lot of things to do here, and there is not enough time to attend to the extravagances of FIFA and its members.”

Mexico eventually hosted the 1986 tournament, which Canada played in – ironically its only men’s World Cup participation.

Sieber, who counts that 1986 World Cup as one of a long line of soccer showcases for which he has served general co-ordinator, has been a sports organizer par excellence. His résumé also includes vice-president of the Canadian Olympic Committee (1985-2009) and Canada’s chef de mission for the 1992 Albertville Olympics.

Fast forward to February, 2011, when Canada submitted its official bid for the 2015 Women’s World Cup to FIFA House in Switzerland. Montagliani, Montopoli, Sieber and CSA president Dominic Maestracci were dining in Zurich with Gary Lunn, then Canada’s minister of state (sports).

“We told him … ‘This is what we’re doing.’ He was totally excited about it, all on board,” said Montagliani, who grew up in the same part of East Vancouver as former Canadian international and coach Bob Lenarduzzi.

After becoming president in 2012, Montagliani spoke of his World Cup plans. But Canada’s intent to bid was made formal in January 2014 when the CSA released its 2014-18 strategic plan titled “Leading a Soccer Nation” at a downtown Toronto hotel.

“The process has to start now,” Montagliani said at the time of a bid to stage “the granddaddy of them all.”

Montopoli told reporters then that talk of a co-hosted bid “might be a little premature but it certainly is possible.”

At the time, the Canadian men’s team was ranked 111th in the world and was mired in an 0-11-3 run since being knocked out of World Cup qualifying in a 8-1 humiliation in Honduras in October, 2012.

Montagliani and Montopoli began working the rounds of government, “working the backrooms” to keep momentum.

Talks expanded to the U.S. and Mexico soccer authorities. In 2015, around the Women’s World Cup, Montagliani had a handshake agreement with his U.S. and Mexican counterparts to go forward together.

For Montagliani, the closeness of the three organizations made sense for them to “share it like neighbours.” It made even more sense when the field expanded to 80 games from 64 with the tournament expansion.

“Vic’s going to be humble about this,” Montopoli said. “But because Vic was the CONCACAF president and FIFA vice-president, he had a big hand in bringing the three countries together.”

“We were better together than being individuals,” he added.

The joint bid to host the newly expanded tournament was officially announced in April 2017 at One World Trade Center in New York City.

The bid blueprint calls for Canada and Mexico to host 10 games each with the United States hosting 60. But that could change after FIFA chooses the host and takes charge of the tournament.

Montopoli says two things were crucial to the Canadian campaign.

One was the Women’s World Cup in 2015, whose success Montopoli says “resonated all over the world.” He said FIFA member associations still “rave” about it.

The tournament set a total attendance record (1,353,506 according to FIFA) for a FIFA competition other than the men’s World Cup.

The other key was Montagliani becoming CONCACAF president in May, 2016.

“We had everything covered from credibility point of view for us to get us over the goal-line,” Montopoli said. 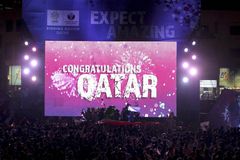 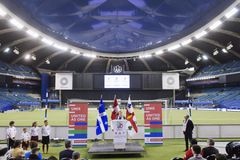 FIFA holds last-minute meeting with 2026 World Cup bidders
May 30, 2018
Report an error
Due to technical reasons, we have temporarily removed commenting from our articles. We hope to have this fixed soon. Thank you for your patience. If you are looking to give feedback on our new site, please send it along to feedback@globeandmail.com. If you want to write a letter to the editor, please forward to letters@globeandmail.com.
Comments