FIFA’s protocol for dealing with discrimination at soccer games was implemented for the first time in the Premier League on Sunday with three stadium announcements during a London derby between Tottenham and Chelsea, after apparent racist abuse toward Chelsea’s Antonio Rudiger.

The announcements came in the second half, after Rudiger was kicked in the chest by Son Heung-min in an incident that led to the 62nd-minute sending-off of Tottenham’s South Korean forward.

Rudiger, who is black, was seen putting his hands under his armpits – seemingly mimicking a monkey gesture – in the 63rd minute.

The third announcement came in injury time, by which stage – according to FIFA protocol – the game should have been abandoned.

Chelsea captain Cesar Azpilicueta said Rudiger had told him he heard “monkey noises” toward him in the crowd, and therefore reported it to referee Anthony Taylor.

“We are very concerned and aware of this behaviour,” Azpilicueta said.

“All together, we need to make it stop. I hope everything gets clear and we eradicate it as soon as possible. It`s an issue not just in football but in life.”

According to FIFA protocol, the second step of the protocol should be an announcement leading to the suspension of the match and the players returning to the locker room for a specific period. If the discrimination continues, the third step should be the abandonment of the match.

It was not immediately clear if there had been repeated incidents of racism, or if the announcements were referring to the first incident reported by Rudiger.

“I saw the referee follow the protocol,” Tottenham manager Jose Mourinho said. “He came to Andre Marriner [the fourth official], he came to me and [Chelsea manager] Frank Lampard and told us what was happening.”

The racist abuse overshadowed an accomplished performance by Chelsea in a 2-0 win that cemented its fourth place in the Premier League.

Earlier, Manchester United lost 2-0 at last-place Watford, with a goalkeeper howler by David De Gea – for the second weekend running – leading to the first goal at Vicarage Road.

Chelsea is four points clear of fifth-place Sheffield United, while the gap is six points to Tottenham in seventh place, and seven points to United in eighth with nearly half the season gone.

Chelsea’s win saw Lampard get one over Mourinho, his one-time coach and mentor at Stamford Bridge, in their first managerial head-to-head in the Premier League.

Mourinho will point to a pair of rash moments by his players, first goalkeeper Paulo Gazzaniga and then Son.

Tottenham was already trailing 1-0 to a goal from Willian after a quickly taken corner, when Gazzaniga came flying out of his goal and pole-axed Marcos Alonso with a studs-first, chest-high lunge to concede a penalty in first-half injury time. Referee Taylor originally awarded a free kick against Alonso, somewhat bizarrely, only to reverse the decision after an invention by the video assistant referee.

Willian converted the penalty for his second goal of the game.

Son’s red card came after he was tackled by Rudiger near the touchline. Son was unhappy at the challenge and, while on his back, flicked his right foot into the chest of Rudiger, who fell backward to the ground.

“Does Rudiger have broken ribs going to the hospital?” Mourinho said. “Other people call it intelligent by Rudiger.”

De Gea’s mistake was very different to Gazzaniga’s, but just as bad in its outcome.

The Spain goalkeeper allowed a tame volley by Ismaila Sarr slip through his grasp and trickle over the goalline off the post in the 50th minute. Embarrassed by his mistake, De Gea slid his arms down the post and dropped face-first to the ground before banging his fists on the turf.

It was another moment to forget for De Gea, who failed to punch clear a corner to allow Everton to grab an equalizer in a 1-1 draw at United last weekend. On that occasion, De Gea argued he was being fouled as he went for the ball but he had no excuses against Watford.

Watford stayed in last place, but moved level on 12 points with Norwich after 18 games. They are six points adrift of safety.

One positive for United was the return of Paul Pogba, the club’s record signing who has missed nearly three months because of injury and, more recently, illness. The France midfielder came on as a 64th-minute substitute. 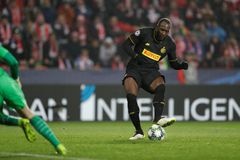 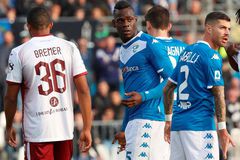