Sergio Ramos equaled the record for the most appearances for Spain as his team continued its march toward qualifying for the 2020 European Championship by beating Faroe Islands 4-0 on Sunday.

The 33-year-old Ramos matched goalkeeper Iker Casillas’ milestone with his 167th game for La Roja. The Real Madrid defender, who received a standing ovation at Gijon’s El Molinon stadium when substituted late in the game, will establish a new mark if he plays against Norway on Oct. 12.

“To equal the best goalkeeper in the history of football was a very important goal for me,” Ramos said. “It was complicated, but I had the good fortune to debut very young and to stay in favour of all the coaches I have had, and be blessed with not suffering injuries.

“I hope I can defend these colours for many more years.”

Ramos has a record of 125 wins, 22 draws and 20 losses with Spain since his debut in 2005. He has helped Spain win a World Cup and two European Championships.

Italy joined Spain in also winning its sixth match in as many qualifiers for next summer’s tournament, keeping both on pace to win their respective groups.

But while Spain eased past the modest Faroe Islands, Italy struggled to win 2-1 at Finland.

Spain and Italy are ranked 1st and 4th in UEFA’s ranking of European teams, respectively. The Faroe Islands are ranked 53rd and Finland 43rd.

Spain leads Group F with 18 points, well ahead of Sweden in second place with 11.

Italy took a big step to winning Group J by taking its total to 18 points. Finland is second with 12.

Coach Robert Moreno might have wanted an even bigger win over Spain’s lowly opponent, but he must have liked seeing both of his strikers in fine form.

Alcacer is building up some superb numbers with Spain, netting 11 goals in 16 appearances. Rodrigo is also producing goals while he and Alcacer both fight for playing times with Alvaro Morata. Rodrigo and Morata have netted four goals each in six qualifiers.

“Our goal of qualifying is almost achieved,” coach Moreno said. “All my players want to play and today was a game to show that they are motivated to play for the national side. They were all locked in and focused.”

Rodrigo put Spain ahead in the 13th when he tapped into an open net after Thiago Alcantara pressured to recover the ball and knocked it to Mikel Oyarzabal, who lured in the goalkeeper before laying off to his attack partner.

Rodrigo doubled the advantage five minutes after the restart with a deflected shot when the Valencia striker received the ball and cut back across the area.

Alcacer got Spain’s third goal in the 90th – slicing in Thiago’s low pass – before he headed in a final goal.

Also in Group F, Sweden’s Emil Forsberg cancelled out Stefan Johansen’s goal for Norway in a 1-1 draw, a fourth consecutive stalemate between the Scandinavian rivals.

Romania forward George Puscas headed in a goal just after halftime to beat Malta 1-0 and leave his team in third place in the group with 10 points.

Italy needed a questionable hand ball decision to convert a penalty and eke out a win in Finland.

Sauli Visnen appeared to have his arm across his chest when he stopped a shot from Andrea Belotti, but the referee immediately pointed to the penalty spot and Jorginho quickly converted the winner in the 79th.

Teemu Pukki had earned and scored a penalty for Finland seven minutes earlier after Ciro Immobile opened the scoring for Italy.

Bosnia and Herzegovina coach Robert Prosinecki resigned after his team lost 4-2 at Armenia, which was led by two goals from Roma midfielder Henrikh Mkhitaryan.

Armenia moved ahead of Bosnia and into third place in Group J with nine points.

Denmark missed a chance to move into the lead of Group D ahead of Ireland after being held 0-0 at Georgia.

Switzerland is a point behind Denmark with a game in hand. 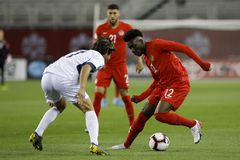 Whirlwind comeback gives Netherlands 4-2 win over Germany Subscriber content
September 6, 2019
Report an error
Due to technical reasons, we have temporarily removed commenting from our articles. We hope to have this fixed soon. Thank you for your patience. If you are looking to give feedback on our new site, please send it along to feedback@globeandmail.com. If you want to write a letter to the editor, please forward to letters@globeandmail.com.
Comments