He offered no excuses.

The right back spoke his mind in a post-game interview after another humiliating home loss, a 4-1 rout against Ajax that ended the team’s reign as Champions League champions.

The elimination followed consecutive home losses to Barcelona, one in the Copa del Rey and another in the Spanish league, capping one of the worst weeks in the club’s recent history.

“It’s all gone in a week,” Carvajal said. “It’s hard to explain. I don’t think I’ve ever felt this bad before.”

Reality finally caught up with Real Madrid in the post-Cristiano Ronaldo era. The club that calls itself the best in the world finally paid the price for losing one of the greatest players of all time.

Madrid decided to play it cool when Ronaldo left for Juventus last year, not making any high-profile signings to make up for his absence. Club president Florentino Perez kept faith in the forwards already in place — Karim Benzema, Gareth Bale, Marco Asensio and Lucas Vazquez — and hoped that youngsters such as Vinicius Junior, Mariano Diaz and Brahim Diaz could provide some of the spark the team lost when Ronaldo left.

At times it looked like Madrid could pull it off. The team went through good spells during the season, but in the end no one could come close to replacing Ronaldo when the team needed it the most.

In the three consecutive losses that brought Madrid’s trophy chances to an end, the team created lots of scoring opportunities but couldn’t put them away, missing chance after chance no matter who played in attack. Madrid got outscored 8-1 in the matches against Barcelona and Ajax. The team’s lone goal was scored by Asensio on Tuesday, with Madrid already down 3-0.

With him on the team, Madrid hadn’t lost a Champions League knockout series since the 2015 semifinals against Juventus. It had reached at least the semifinals in eight straight seasons and hadn’t failed to make it past the last 16 since 2010, a year after the Portugal forward joined from Manchester United.

The day before the loss to Ajax, Madrid midfielder Luka Modric was the first to warn that the team was missing the killer instinct that a player like Ronaldo used to provide. He said the club’s attempt to share the responsibility for what used to be Ronaldo’s role didn’t work because the players who stayed in the squad were not able to step up in attack.

Fans at the Santiago Bernabeu Stadium on Tuesday loudly called for Perez to resign as club president, blaming him for the team’s dismal season, which started with the controversial hiring of former Spain coach Julen Lopetegui and his firing a few months later with the team struggling.

Perez is already under pressure to make the needed moves to put the team back on track next season. Fans want another “Galactico” signing to help replace Ronaldo, and only top names like Neymar or Kylian Mbappe would fully satisfy the demanding Madrid crowd. Eden Hazard and Mauro Icardi are more likely to arrive, though, and they would already mean a much bigger boost to the team than it got in the last two transfer windows.

Perez also has a decision to make in the coaching position, with Santiago Solari looking increasingly like he is on the way out. Jose Mourinho has been rumoured as the top candidate for the Madrid job ever since he was fired by Manchester United last year, although a coaching change by Perez is not expected until the end of the season.

“All we can do is come back tomorrow and keep working hard. We have to keep playing,” Solari said. “We have to stay calm during this difficult moment and face it with character. Madrid is bigger than all of us. It will always come back, and it will come back stronger than ever.” 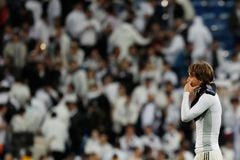 Canada’s Sophie Schmidt lining up as a defender as the team prepares for the Women’s World Cup
March 5, 2019 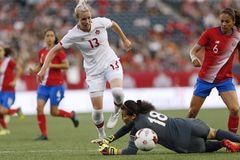 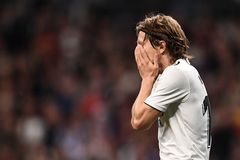