Just when some of Europe’s top teams risked failing to advance from their Champions League groups, they steadied the ship.

Real Madrid and Tottenham both earned their first European wins of the season Tuesday against overmatched opponents – but in very different style.

Real had to work hard to win 1-0 against a Galatasaray team with its own problems, while last season’s finalist Tottenham swept aside Red Star Belgrade 5-0.

That emphatic win was sorely needed for Tottenham, which had won just two of its past 11 games and conceded seven against Bayern Munich in its most recent Champions League outing. But Tottenham isn’t out of the woods yet.

“We still know we’ve got a long way to go,” striker Harry Kane said. “We can hopefully build on this.”

Juventus came within 13 minutes of a loss that could have endangered its hopes of reaching the knockout stage before Paulo Dybala scored twice to beat Lokomotiv Moscow 2-1.

Meanwhile, Paris Saint-Germain, Bayern Munich and Manchester City are all firmly on course to advance after recording their third wins to top their groups.

Having won just one of its past four games, Real was looking to regain some momentum with a big victory over Turkish champion Galatasaray. It had to settle for a narrow win.

A deflected goal from Toni Kroos gave Real a 1-0 win but it was far from a sure thing.

On his return to the squad after missing Saturday’s loss to Mallorca, Eden Hazard was Real’s most effective attacking threat, setting up the goal for Kroos and hitting the bar in the second half. However, like the rest of Real’s team, he wasn’t consistent enough to dominate in Istanbul.

Real was fortunate to get away with poor defensive positioning, which handed two good chances to Florin Andone, whose shots were saved by Thibaut Courtois. The Turkish club, sixth in its domestic league, could have snatched a draw with headed efforts at corners late on.

Paris Saint-Germain is headed for qualification after a drama-free 5-0 win over Club Brugge, which drew 2-2 with Real in the previous round.

PSG only had a 1-0 lead with a half-hour remaining before substitute Kylian Mbappé scored a hat trick to turn it into a rout.

After being humiliated 7-2 by Bayern in its most recent game, Tottenham responded with a big win of its own.

While Red Star was hardly of Bayern’s calibre, scoring five goals for the first time since January could be a solid morale booster for Tottenham.

Son Heung-min and Kane scored two goals each, while Erik Lamela marked his 200th appearance for Tottenham with a goal and two assists.

Bayern briefly risked dropping Champions League points for the first time this campaign, but two goals from Robert Lewandowski helped it recover from 1-0 down against Olympiacos to win 3-2.

Juventus nearly suffered its first loss of the season in all competitions before Dybala took matters into his own hands.

With Juventus 1-0 down to a goal from Alexei Miranchuk, the Argentine forward curled a 77th-minute shot into the net and followed up shortly after by slotting home a rebound for the second.

Despite Juventus being on a seven-game winning run across all competitions, all but two of those wins have been by a one-goal margin.

Juventus is level with Atletico Madrid on seven points at the top of Group D after Alvaro Morata’s header lifted the Spanish club to a 1-0 win over Bayer Leverkusen.

Morata broke the deadlock in the 78th minute to avert what would have been Atletico’s fifth consecutive home draw in all competitions.

Things are going far from smoothly for English clubs this season in the Champions League – except for Manchester City.

The Premier League champion is cruising in first place in Group C after earning its third win in emphatic style with a 5-1 demolition of Atalanta. The other three English clubs in the Champions League – Tottenham, Chelsea and Liverpool — have all taken losses so far.

Ruslan Malinovskyi gave Atalanta the lead from the penalty spot, but that lasted just six minutes before Sergio Aguero levelled with the first of his two goals. Raheem Sterling scored a hat trick inside 11 minutes in the second half.

Atalanta has lost all three of its games in its debut Champions League campaign but could still qualify if it can beat Shakhtar and Dinamo Zagreb in the second half of the group stage campaign.

The Ukrainian and Croatian clubs played out a 2-2 draw Tuesday, which meant neither took full advantage of Atalanta’s struggles in the fight for second place. 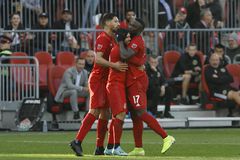 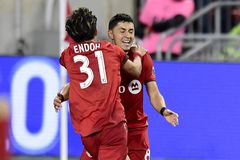 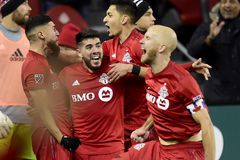