The MLS champion Seattle Sounders blanked the depleted Vancouver Whitecaps 3-0 Sunday night to climb out of a hole at the MLS is Back Tournament.

Nicolas Lodeiro, Jordan Morris and Raul Ruidiaz scored for Seattle, which leapfrogged Chicago to move into second place in Group B with its first win in three games at ESPN’s Wide World of Sports complex.

The Whitecaps, winless in two tournament outings and missing a chunk of their lineup, are still mathematically alive. But they need to beat Chicago by at least three goals in the final Group B game Thursday morning to have a chance of progressing as one of the four best third-place finishers.

Rubbing salt in the wound, the Whitecaps lost goalkeeper Maxime Crepeau to injury after his hand came out the worst in a 54th-minute collision with Seattle’s Handwalla Bwana.

Third-stringer Thomas Hasal, a 21-year-old Canadian youth international from Saskatoon, came on to make his MLS debut and was quickly called to action with back-to-back saves.

Backup ‘keeper Bryan Meredith left the team last week after the death of his mother Beth.

San Jose, helped by substitute Chris Wondolowski’s 161st career goal, defeated Chicago 2-0 earlier in the evening to win Group B with an unassailable seven points. The Quakes will play one of the third-place teams in the round of 16.

The San Jose win kept Vancouver’s slim hopes alive. A victory Sunday and the Whitecaps could have eliminated Seattle, which had one point from its first two games.

Chicago, meanwhile, needs to beat Vancouver to finish runner-up in the group. A draw or loss will keep the Sounders in second.

Columbus, Orlando, Philadelphia and Portland have also already qualified for the round of 16.

The Sounders opened the scoring in the 16th minute via Lodeiro from the penalty spot after a Morris shot hit centre back Jasser Khmiri’s arm. It didn’t seem like the Tunisian defender could have done much about the contact but his arm was not tight to his body.

Morris made it 2-0 in the 34th minute after Vancouver lost possession at midfield. Lodeiro found Morris, who outpaced fullback Jake Nerwinski and poked the ball past Crepeau.

Ruidiaz added to the lead in the 51st minute, capitalizing on some woeful Vancouver defending off a corner.

Vancouver had no answer for Morris, whose runs repeatedly carved open the Whitecaps defence. And it offered little on offence, managing just one shot on target in each half.

Missing eight players for a variety of reasons, Vancouver fielded the same lineup as last time out in a 4-3 loss to San Jose. Coach Marc Dos Santos switched to a 4-4-2 formation from 4-3-3, however.

Morris, Bwana and Shane O’Neill came into the Seattle starting 11, which featured seven starters from the 2019 MLS Cup final win over Toronto.

Vancouver’s defence wobbled early but a third-minute Seattle goal was negated for offside. The Sounders came close again in the seventh minute with Crepeau stopping a Morris shot and Nerwinski throwing his body in front of the follow-up shot.

An unmarked Leo Owusu had a glorious chance for Vancouver in the 12th minute off an Ali Adnan free kick but his header went wide.

Defender Cristian Gutierrez made his Whitecaps debut off the bench in the second half.

Vancouver was the last team to see action at the tournament. A late arrival, its start was further delayed by the withdrawal of FC Dallas, its first opponent, due to a rash of COVID-19 positive tests.

A young Vancouver side led San Jose 2-0 and 3-1 but coughed up three late goals, losing on a 98th-minute strike by ex-Whitecap Shea Salinas.

The exodus has continued.

Defenders Janio Bikel (adductor strain) and Erik Godoy (quadricep strain) were injured in training. Bikel is gone for the tournament while Godoy was unavailable for Sunday’s game.

With group games at the tournament counting in the regular-season standings, Seattle improved to 2-1-2 while Vancouver slipped to 1-3-0. 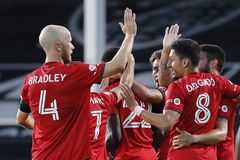