The dominance of last season is becoming a distant memory for the defending Premier League champions.

“There is nothing fundamentally different, it is just the result is different,” Klopp said. “We have not to worry about it, but we obviously have to ignore the fact and hope it will be good again.

“We did that, but the only possibility we have is to create situations and be ready to fail and do it again. That is a massive difference to when you are flying, because then you deal with the missed chances better.”

Targets are being revised, it seems, with a top-four finish the priority.

“We spoke about the fight for the Champions League, so that’s the most important thing and for that you need points,” Klopp said. “It’s not about, ‘If we don’t become champions, it’s not fun any more.’ That’s not like it is. We just fight for everything and I saw that tonight again. That’s all I need.”

This is a team – albeit depleted by injuries – that won the title by 18 points in July to end Liverpool’s 30-year title drought.

“I know that football fans in general are not the most patient species on the planet – they want to win each football game,” Klopp said. “I am not very different to that, but I’m long enough in the business to know that you have to go through more difficult periods as well. And it’s not the most difficult in my life – not even close to it.”

Ole Gunnar Solskjaer has endured many difficulties but has now been in charge of United more than two years and leading the club’s first credible title challenge since Alex Ferguson retired with the Premier League trophy in his hands in 2013.

Only Alisson Becker’s fine saves from Bruno Fernandes and Paul Pogba prevented United being the first team to win at Anfield since 2017.

“We were a bit disappointed in the performance, not just the result,” Solskjaer said. “We didn’t do well enough to cause them problems in the first half, but we defended well and they didn’t create too many chances.

“We know we have players who can win you a game in the blink of a second and Bruno and Paul almost did.”

There was no shortage of goals for United’s crosstown rival, although they came from a rare source: John Stones.

It’s taken until halfway through his fifth season at the club to finally score in the league – and he did so twice after finally breaking his duck.

There was nothing unfamiliar about the provider of the defender’s first in the 26th minute. Kevin De Bruyne contributed his 100th assist for City with a cross curled to the head of Stones.

After Ilkay Gundogan netted 11 minutes into the second half, Stones was on target again in the 68th after Ruben Dias’ header was parried.

There was a stylish conclusion to the rout with Raheem Sterling curling in a free kick in the 88th at the Etihad, which remains closed to fans like all stadiums in England.

Tanguy Ndombele audaciously flicked over goalkeeper Aaron Ramsdale from a tight angle to complete Tottenham’s 3-1 victory at last-place Sheffield United. It gave Jose Mourinho’s fifth-place side a first away success in the Premier League in two months.

Mourinho has previously criticized the contribution of Ndombele, who became the club’s record signing in 2019 when he joined for 60 million euros (then $68 million), months before the Portuguese took charge. 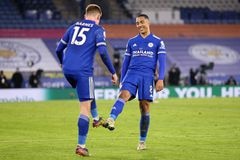 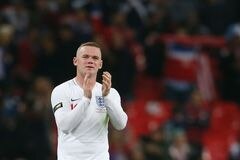 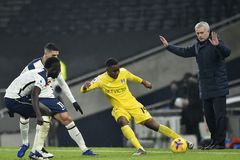