In hosting Inter Miami CF on Tuesday, struggling Toronto FC could do well to take a page out of the second-year MLS team’s book.

And hope that it can get to where Phil Neville’s side has got to.

Miami has taken 21 of a possible 30 points over its past 10 games and, in ninth place in the East, is just two points below the playoff line. Toronto has collected six (1-6-3) over the same period and is 16 points out of the playoffs.

Neville knows what Toronto has been going through.

“When you are suffering, confidence and belief drains from you. But when you start getting good results, the confidence starts coming back to you,” said Neville. “You then realize that there’s actually some really good football players in this football club and then you start playing more as a team.

“Mentality, attitude, intensity – being able to handle adversity, I think, has been the biggest thing that we’ve been absolutely sensational with. The ability to take punches, the ability to bounce back from disappointments, the ability to support each other in difficult moments was something that I think has been our most impressive thing.”

Neville offers a simple quote from Bill Belichick, coach of the New England Patriots: “Just do your job.”

Of course, as with most things involving Belichick, there is more to it than that.

“Maybe the one word that isn’t in that sentence that’s implied but not stated is, ‘Do your job well. Take care of the one or two, three things that we’ve emphasized all week and we’ll be okay,’” Belichick said in NFL Films’ Do Your Job: Bill Belichick and the 2014 New England Patriots.

“Because this was a team that maybe two months ago, when we conceded a goal, it affected us really, really badly,” he said. “We conceded a goal, the team would probably lose confidence and belief in each other and confidence and belief in the game plan that we had. And we’ve worked really hard on the mental toughness of the team on players sticking to doing their jobs.”

“There’s no point beating up a team that’s already down,” said the Spaniard. “I believe that everybody wants to do a good job and only we can get out of the situation.

“It’s more about how you can give support and build the confidence of the players. Because at the end of the day, the games are coming very fast. We need to get these guys back very quickly into some kind of condition to win games.”

Toronto fullback Richie Laryea says the club is doing all it can to stay positive.

“It obviously doesn’t feel good to be in the state that we’re in right now,” he said. “So we’re trying a lot of very different things and hoping it helps us and moves us in a better direction.

“We have to just take these next 11 games and get something out of them for us and obviously for the fans.”

Toronto will be without two of its three designated players, with reigning league MVP Alejandro Pozuelo missing a second straight game owing to a lower body injury. Star striker Jozy Altidore is recovering from ankle surgery.

Forward Ayo Akinola and midfielder Ralph Priso are both gone for the season after undergoing their own surgeries.

Venezuelan winger Erickson Gallardo, meanwhile, said via his Instagram that he has recovered from COVID-19 after testing positive two weeks ago. The MLS team loaned Gallardo to Toronto FC 2 in July.

Neville said he would assess his side’s fitness after morning training, saying three or four players had “little knocks.”

“The games are coming thick and fast and I’m not going to take any risks with any players,” he said. “But we know that [Tuesday] night is a massive game for us. We’re going to have a team [Tuesday] night that will be fresh, full of confidence and belief. And we want to keep this momentum going now.”

Miami won 3-1 when the clubs met in August in Fort Lauderdale, Fla. But Neville is not taking Toronto lightly, repeating what many opposition coaches have said this season.

“We’re playing against a team that’s going through a difficult period but a team that, when you look at their roster, should be a team that probably should be in the playoff positions because I think they’ve got great quality and great experience and really good young players.

“The score line three or four weeks ago was probably slightly flattering for us because I thought they did possess the ball quite well in that game.” 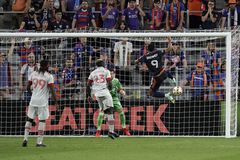 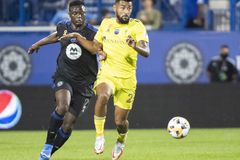 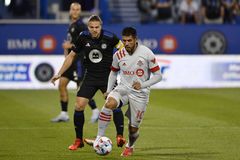