Jozy Altidore returned to the Toronto FC fold Monday, saying he was happy to be back after being exiled from the MLS club more than seven weeks ago.

But the star striker, despite repeated questions, was short on details about what led to his prolonged falling-out with the team. He came closest when asked if reports he had wanted out of Toronto were accurate.

“At the end of the day, nobody wants to be somewhere where they weren’t wanted,” he said during a virtual media availability. “And I’m never going to be in a place if I’m in the way. I want to make sure quickly that doesn’t happen.

“Things change in football. Things change all the time. And I’m just so happy to be back in the team. I love Toronto. All of you know that. You know my family loves this city. And I just look forward to getting back on the field and trying to turn this season around.”

Asked if he had been treated fairly by the club, Altidore paused for some 13 seconds before answering.

“Things happen, man, all the time. And I think sometimes when you’ve been in a workplace a long time, it’s important to remember you’ve been through a lot together,” Altidore, in his seventh season at TFC, finally replied. “And so, for me, I don’t hold any grudges against anybody. I don’t believed in burning bridges. I don’t believe in wishing bad on people.

“All I want to focus (on) now is the positive. I just want to focus on my teammates, focus on this amazing city. I just miss being a part of this group and representing this city for the last couple of months.”

At 2-8-2, languishing in the league basement, Toronto could use the help.

“I think we’re going to be a better team with him on the field,” Manning said.

Altidore’s future with the club has been up in the air since a confrontation with former coach Chris Armas after being substituted in the 70th minute of a 1-0 loss to Orlando City on May 22.

“The technical team was upset about it,” Manning said of the incident. “And that’s basically what caused the suspension.”

The 31-year-old Altidore has been training on his own ever since. Until Monday.

Armas has since been fired, paying the price for a 1-8-2 start to the season. The club is now under the guidance of assistant coach Javier Perez, who oversaw last week’s 3-2 win in New England.

Altidore said Manning reached out to him in late June, asking him to come back.

He also said Perez called him the day after he was put in charge, saying he wanted him back with the team. That was roughly a week after the Manning conversation.

Manning said his message to Altidore was “Let’s rewrite the story. Let’s move on. And let’s put this behind us. And help us win.”

“And I don’t want to make too much of that,” he added. “But when we had our conversations, part of it was there had to be some kind of reconciliation. My role, one of the biggest things, is to try to make sure everything is in alignment, from the team on the field to the front office to the business staff to the stadium staff.”

Altidore made no mention of general manager Ali Curtis during his nearly 14-minute availability.

Altidore returned to full training with the team Monday, TFC’s first session at its north Toronto practice facility since returning last week from the U.S.

“There’s energy there,” said Manning. “The big guy, when he’s in a good place, we know what he can do.”

With 75 goals in all competitions, Altidore is second on TFC’s all-time scoring list, behind Italian star Sebastian Giovinco’s 83. And with a salary of US$3.6 million, the U.S. international ranks sixth on the MLS pay scale this season.

But he has only appeared in four MLS games this season, with one goal in 189 minutes played. Altidore said he will probably take “a few weeks” to get game-ready.

He signed a three-year contract extension in February 2019 that will keep him in Toronto through the 2022 season.

Altidore has bumped heads with Toronto management in the past, complaining about medical treatment and support. But he has also often cited his love for the club, its fans and the city. And TFC players have said he is a caring, supportive teammate.

An announcement on TFC’s return to BMO Field is also expected soon. The club has not played at home since Sept. 1, 2020, finishing last season in East Hartford, Conn., and starting this year in Orlando — playing 31 straight games on the road.

Toronto’s next scheduled game is a home matchup Saturday against Orlando.

“We’re hoping to get confirmation that we can play there this weekend,” said Manning.

Altidore, for one, believes normal service will soon resume at club.

“If there’s anybody out there that’s counting us out, they’re making a big mistake,” he said. “Because that locker room is a locker room of champions. It’s a locker room of winners. We have a new guy in (Venezuelan winger) Yeferson Soteldo that’s ready to set the world on fire. And we’re motivated and as hungry as ever.” 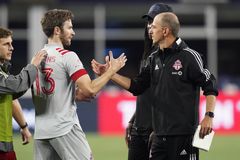 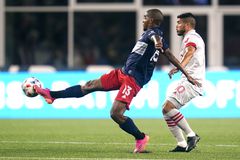 Toronto FC hopeful that Altidore impasse will soon come to a resolution
July 6, 2021 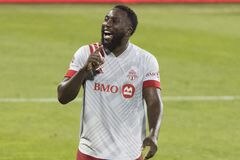