Toronto FC star striker Jozy Altidore remains in limbo as the MLS team returns to action after the international break.

General manager Ali Curtis said Monday that the 31-year-old U.S. international continues to work out on his own while the club looks to resolve his future.

“All options are on the table, to be honest,” he told reporters Monday.

While neither side is saying much, reading between the lines it appears divorce is more likely than a reconciliation. It seems clear that Altidore is not happy, although no one has explained quite why.

Altidore has been on the outs with the club for some weeks. Apparently a confrontation with coach Chris Armas after being substituted in the 70th minute of a 1-0 loss to Orlando on May 22 was the last straw in what has at times been a volatile relationship.

Curtis made a point of talking up the way TFC looks after its players and noted soccer is a team sport rather than an individual one.

Altidore is in his seventh season with Toronto, which signed him to a three-year contract extension in February, 2019. With a guaranteed salary of US$3.6-million this season, he ranks sixth among the league’s wage-earners, according to the MLS Players Association.

Altidore, who rarely speaks to the media, is popular with his teammates who say he is supportive and encouraging behind the scenes. And when healthy, which has not always been the case, he can be a force on the field.

He has scored 75 goals in all competitions for Toronto, second only to former Italian star Sebastian Giovinco (83). This season he has appeared in four league games, including two starts, with one goal in 189 minutes.

While the striker has spoken often about his affection for the club, city and its fans, he has butted heads with the front office in the past.

In January, 2020, he criticized it over its handling of captain Michael Bradley’s ankle injury.

In April, 2019, he accused club president Bill Manning of putting his ego ahead of player welfare by banning a valued trainer because of his association with Giovinco. A deal was soon struck to bring the trainer back into the fold and Altidore apologized.

After the NBA and other teams elected not to play in late August last year in the wake of the police shooting of Jacob Blake in Wisconsin, Altidore sat out TFC’s game in Montreal for “personal reasons,” according to then-TFC coach Greg Vanney.

There is little information about what sparked this latest and most serious impasse.

Altidore has not spoken publicly on the matter. And Curtis has not offered specific details

“It’s complicated,” he told reporters. “He’s a player that’s been here for seven seasons now. This is his seventh season. So there’s a lot of layers, there’s a lot there.”

“We’re trying to work through all those different details to find a way such that we can move forward so that we can all move past this moment that we’re in in a more permanent way,” he added. “And we’re trying to figure out what that looks like.”

Curtis said conversations continue with Altidore’s agent. But it seems clear the club wants to move on.

“Always sooner is better than later, particularly in sports where games keep coming,” he added. “But we’re doing our best there. We’re trying to be respectful to all parties and we’re trying to keep this in the locker-room.”

Armas declined to wade into the Altidore situation.

“I’m not going to share any inside information on Jozy, I think for the sake of respect for everyone involved, especially Jozy,” he said Monday.

Citing his “long relationship” with Altidore, Bradley said he hoped the matter would be resolved.

“At this point, I want the best possible situation and outcome for Jozy, for his family and for the club,” the TFC skipper said.

“It’s not an easy situation, it’s not a simple situation,” he added. “And so all I can say is, again, that I hope there’s a solution where Jozy gets the respect and the appreciation that he deserves from the fans and from the city for the incredible role that he has played in putting this club where we are right now.

“When the book gets written and when all is said and done, we’re talking about one of the best, if not the best player, to ever play for the club. And the role that he played on so many of the big nights, it can’t be overstated.”

Bad news for Toronto FC with Altidore on the outs and Soteldo sidelined by injury
Subscriber content
May 28, 2021 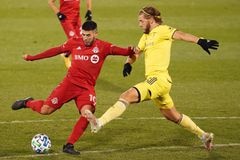 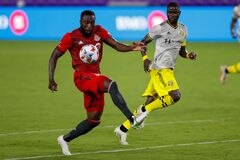 Striker Dom Dwyer looks to repay Toronto FC for its faith in him
Subscriber content
May 20, 2021 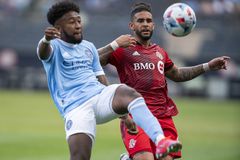