Head coach Greg Vanney has experimented with different lineup combinations all summer in the hopes of finding the right mix that will push his Toronto FC into the playoffs and make another run at an MLS Cup.

With newcomers Erickson Gallardo and Nicolas Benezet in the starting 11 for the first time, TFC’s come-from-behind 2-1 victory against the rival Montreal Impact seemed to be a step in the right direction at BMO Field on Saturday.

“You hope tonight was one of those domino games,” Vanney said. “You get the group together, you get some energy in the group, and you build from it.

“You get into the playoffs by getting the results. Now we sort have tipped that momentum — domino over — and we start to really go for it.”

The win pushed TFC (10-10-7) past the Impact (10-14-4) and into the final playoff spot in the Eastern Conference. TFC has seven games remaining in the regular season, while Montreal has only six outings left.

Justin Morrow delivered the game-winner. He finished off a pinpoint passing play in the 81st minute, converting a pass from Jozy Altidore inside the box on a play started by TFC captain Michael Bradley as the final whistle neared. Montreal goalkeeper Evan Bush got his arm on Morrow’s shot along the ground, but the ball had enough steam to cross the goal line.

“We have a lot of moving pieces right now,” Morrow said. “We have guys that we are trying to fit on the field and we’re still figuring ourselves out. But that’s OK because we had a good performance today and we’ll kick on from here.”

The first half was played at a slow pace. Montreal took the lead when former Barcelona forward Bojan Krkic scored a long-range goal early in the second half to give the visiting Impact a 1-0 lead.

It was the first goal for Krkic, signed earlier this month by the Impact, with his new club. He took the ball into the middle and beat TFC goalkeeper Quentin Westberg with a hooking shot to the left from outside the box.

The goal woke up TFC, and it dominated the rest of the way.

Marky Delgado scored his first of the season in the 63rd minute to draw TFC even. Bush punched the ball to Delgado outside the box, and his shot along the ground found its way in for the equalizer.

“I thought we stayed organized all night, which is one of our objectives if we’re going to get into the playoffs, and if we want to make any hay in the playoffs we have to be connected as a group,” Vanney said.

TFC’s head coach asked his players to be more aggressive and push the pressure on the Impact’s backfield. The tactic changed the game in TFC’s favour.

“On purely the technical part we were really consistent,” Westberg said. “Then coming from a 1-0 deficit, tying the game and then winning it, making the last minute our’s and not conceding anything, that was great.

“At some point it’s technical, it’s physical. But ultimately it’s the heart and how badly you want it more than your opponent. Tonight being a derby it makes it more special, and it’s much more than three points.

The Impact has gone winless in its past four. After blowing a 3-0 lead to settle for a 3-3 draw with FC Dallas at home last Saturday, head coach Remi Garde was fired. Wilmer Cabrera was hired as Garde’s replacement on Wednesday. So there wasn’t much time for the new boss to make changes to the team’s system. 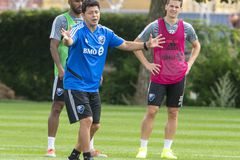 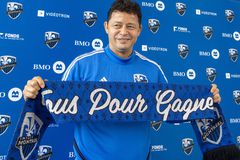 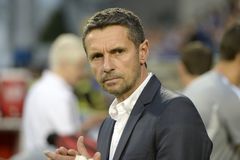