Just like every other U.S. citizen, Michael Bradley has been following the events south of the border “extremely closely.”

And even though he will be spending his weekend in New Jersey as Toronto FC wraps up its regular-season campaign with a road game Sunday against the New York Red Bulls, the TFC captain will hardly be alone if his thoughts drift to Pennsylvania.

“Will we keep an eye on what’s going on Philadelphia?” he said. “Absolutely.”

But it’s the race to the Supporters' Shield, not the White House, that most concerns the TFC captain. With the Philadelphia Union, currently tied atop the Major League Soccer standing with Toronto, entertaining the New England Revolution at the same time as TFC plays the Red Bulls, it’s down to a two-horse race to be crowned regular-season MLS champions.

“It’s a big game obviously for us, for our team, for our club,” Bradley said. “The Supporters' Shield is always an ambition.”

Since MLS recently switched to points per game instead of total points to determine league placing, both TFC and Philadelphia are tied at 2.00 PPG, with both sides also level in the first tiebreaker of wins per game (0.59). However, the Union is currently in front based on goal differential per game, which is the second tiebreaker, and consequently TFC will have to better the Union’s result on Sunday to stand a chance at the silverware.

Both teams are entering historic territory. In MLS’s 25-season existence, only six teams have finished a season with a PPG of 2.00 or higher, including Toronto FC during its 2017 treble-winning season, when it finished with 2.03. A win Sunday would see TFC better that, wrapping up its campaign with a 2.04 average from 23 regular-season games.

That would be the fourth-best mark in league history, and show the hallmarks of the kind of solid outfit that Bradley routinely strives for.

“We want to be a team that from the first game to the last game is consistent, that we’re able to separate ourselves from the rest of the league in terms of our play, in terms of results,” the TFC captain said.

Bradley says TFC’s track record should give his team confidence heading into Sunday. In addition to winning the treble of Supporters' Shield, MLS Cup and Canadian Championship in 2017, the team has also been to two other MLS Cups and won two other Canadian Championships in the past four seasons. He believes that success can give his side a mental edge over Philadelphia on Sunday.

Win or lose Sunday, TFC will still enter into a two-week stretch without a game. There is a break for international soccer, before the MLS Cup playoffs begin with the play-in games on Nov. 20. That round will feature the Montreal Impact should it beat D.C. United on Sunday.

Having called Toronto, Orlando and currently Hartford, Conn., home this season, head coach Greg Vanney is looking forward to the extended break. Both the players and coaching staff will be able to head back to Toronto for a bit to see their families, and the break will also allow for more hands-on coaching, the sort that hasn’t been possible in between the steady diet of crucial games and travel.

It will also allow certain TFC players to rest up, with Vanney confirming that striker Jozy Altidore and midfielder Jonathan Osorio might be available this weekend.

However, with Toronto locked into a top-two seed in the Eastern Conference, a game against one of the winners of the play-in round is guaranteed. TFC’s head coach is somewhat concerned about his team getting caught flat-footed against a team that will already have had a taste of playoff soccer by the time his team begins its MLS Cup campaign.

“The teams that play the play-in game, they have that one opportunity to really kind of get the vibe of being in the playoffs under their belt,” he said. “So when we get going we have to be ready to match that intensity and that experience that they already have.”

MLS was one of the first leagues to return to play following the pandemic-enforced stoppage in March, beginning with its MLS Is Back tournament in Orlando at the start of July. The players have had to watch as the NHL, NBA and MLB all return and finish their seasons since then, but with MLS Cup scheduled for Dec. 8, they know the end to a “difficult year,” as Bradley put it, is in sight. 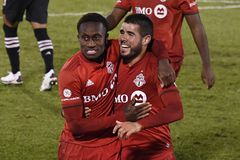 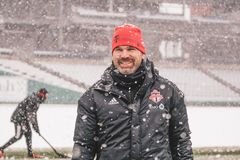 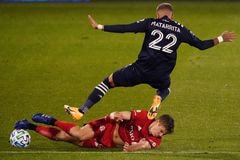