Nick DeLeon will see a lot of familiar faces Wednesday when D.C. United visits BMO Field. He wants to beat them all.

“I would be lying if I said this game wasn’t a little more important for me,” said the Toronto FC winger, who played 190 regular-season and playoff games over seven seasons for D.C. United before coming north last December.

“It’s just a little bittersweet. But I definitely want to take it to them. I think grudge is a good word to use. I can’t lose this game [Wednesday], put it that way.”

DeLeon joined Toronto via the re-entry draft after United, which took him seventh over all in the 2012 MLS SuperDraft, elected not to exercise his contract option after last season.

The move to Toronto has worked out well. The 28-year-old from Phoenix has played in all 10 of Toronto’s games this season, starting nine of them, and was rewarded with a new contract in April.

DeLeon said he expected to hear from some of his former teammates in advance of the match. “A little bit of trash-talk, he said with a smile. ”Just to spice things up a little more.“

DeLeon is still part of the D.C. United record book. He leads the all-time series against Toronto for D.C. in shots (22) and fouls suffered (14).

Still, DeLeon acknowledged there is more to the game than his reunion.

Toronto (5-4-1) has lost its past two matches, against Atlanta and Philadelphia, and won just two of its past seven (2-4-1) as it struggles between the balance of attacking and defending.

“Honestly [the mood] is pretty good,” DeLeon said. “I think the guys have rallied together, which is good to see. Because it can easily go the other way, where it’s a lot of complaining and a lot of guys kind of doing their own thing.”

“I know guys are going to come out hungry [Wednesday] because we need that win and [to] put this ship on the right path.”

The two teams are near opposites when it comes to goals.

United finished 15 points ahead of Toronto last season despite a miserable 1-9-7 road record, attributable in part to a front-end-loaded schedule while Audi Field was finishing construction. The team arrives with a league-leading 3-1-1 road mark this year.

Toronto will be without defender Laurent Ciman, who came off with an ankle injury on the weekend against Philadelphia. TFC coach Greg Vanney says the Belgian international will likely be out “a week or so.”

Veteran Drew Moor, who was on the bench Saturday after missing five games because of injury, would seem a natural replacement. Star striker Jozy Altidore saw action off the bench on the weekend and is expected to return to the starting lineup.

Brazilian fullback Auro, whose back locked up on him during the weekend game, has been deemed good to go.

Vanney has called for more aggression in attack, while staying connected at the back and making good decisions in transition.

“We’re having a couple of mental lapses in times where you can’t have them,” Altidore said.

Part of the issue is the need to look to more than just Spanish playmaker Alejandro Pozuelo, according to Vanney.

“At times, things are available for us and we choose to play the player instead of play the space … the ball needs to go to the best possible space, not necessarily to the best player in that moment,” he said.

Toronto will have plenty to keep its eye on.

Former England captain Wayne Rooney has six goals for D.C. United, four of which are game-winners. Midfielder Luciano Acosta has been linked to top clubs overseas, while midfielder-forward Paul Arriola is another sparkplug. 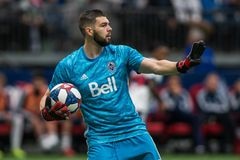 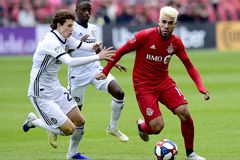 Villalba, Gressel lead Atlanta to 2-0 victory over Toronto
May 8, 2019 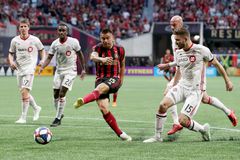