Alejandro Pozuelo has a long way to go to match Jaime Moreno’s career MLS record of 44 successful penalty kicks. But Toronto’s FC’s Spanish playmaker has made a good start to the chase, showing he is money when it comes to spot kicks.

Pozuelo, in just his second MLS season, made it nine successful penalties out of 10 regular-season attempts in the North American league when he befuddled Ryan Meara in Toronto’s 1-1 tie with the New York Red Bulls on Wednesday – his 48th regular-season MLS game.

The 29-year-old from Seville is also 1-for-1 from the penalty spot in the post-season, which the league counts separately.

There was a second failed attempt when he tried to pass the ball to teammate Pablo Piatti in a 1-0 loss to the Montreal Impact on Sept. 1. Piatti scored but the goal was waved off due to penalty box encroachment and the attempt does not count in Pozuelo’s official penalty kick history.

Moreno, a D.C. United stalwart who played 15 MLS seasons, was 44-for-52 in regular-season penalty attempts. His eight misses are tied for the most, along with two others.

The Bolivian also holds the league record for most consecutive successful penalty kicks, converting 20 in a row from April 2005 through June 2008. Seattle’s Nicolas Lodeiro, who has yet to miss, has the longest active streak at 14.

Among those with a minimum of nine penalty attempts, four others have been perfect from the spot.

Benny Feilhaber, now retired, went 12-for-12 while former Montreal Impact midfielder Saphir Taider and the retired Brad Evans and Jovan Kirovski were all 9-for-9.

In fact, there are nine players who have at least nine penalty kicks goals and just one miss, like Pozuelo.

Still the Spaniard has an impressive arsenal from the penalty spot.

His run-up rarely changes – a compact, deliberate five-step setup starting slightly from his left. And while Pozuelo is good with both feet, he uses his go-to right on spot kicks. Once he gets to the ball, he can either send it left or right, opening his boot to angle the ball into the corner.

And of course, there is the Panenka – when he sends the ball down the middle into the space hopefully vacated by the diving 'keeper. It’s named after Czech international Antonin Panenka who made the cheeky move famous when he pulled it off in the 1976 European Championship final against West Germany’s Sepp Maier.

New York City FC’s Sean Johnson is the only MLS 'keeper to deny Pozuelo. But he has also been beaten four times by the TFC designated player.

“He runs onto (the ball) kind of straight,” said Toronto coach Greg Vanney. “So it’s difficult for goalkeepers to see what’s going to happen. He’s looking at them right in the eyes, he’s trying to see what they’re going to do.”

If they commit to one side, Pozuelo will punish them. If they pause, he will slip it into the corner.

“We see it in training every day,” Vanney added. “It’s just so hard for anyone to figure out what’s coming.”

“He’s got everything in his skill set,” Westberg added. “He can chip it, he can hit it hard near post either side. He can hit it in the air. He’s really comfortable with the ball, obviously. And it’s just a pleasure to see. I think soccer belongs to the ones that handle the ball best with his feet and he’s definitely one of them.”

Pozuelo’s skill is welcome on a team that has experienced pain in past penalty shootouts. And he has smoothly taken the spot kick reins from Sebastian Giovinco, who was 11-for-17 from the penalty spot in all competitions for Toronto.

Pozuelo, who has started all 18 of Toronto’s games this season, is enjoying an MVP season. He leads the league with 10 assists and is tied for fourth in goal-scoring with eight.

June 26, 2019: SCORED. Shoots to his left in 94th minute, 3-2 win over Atlanta United at BMO Field. Brad Guzan hesitates, then dives the right way but can’t make save.

Sept. 1, 2020: Attempt to pass to Pablo Piatti misfires in 46th minute of 1-0 loss to Montreal at BMO Field. Piatti scores but play is negated for encroachment. 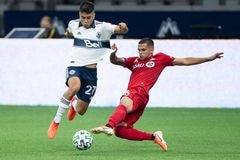 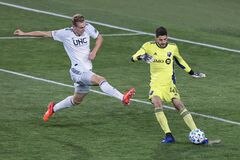