Canada’s version of England’s FA Cup heats up in the third round starting on Tuesday.

The Voyageurs Cup is the highest domestic competition for clubs vying to play in the CONCACAF Champions League and potentially the FIFA Club World Cup.

Canada’s championship has a similar dynamic on a smaller scale to the FA Cup field that runs the gamut from Premier League giants to non-league minnows with the odd buzzy upset.

The MLS’s Vancouver Whitecaps and Montreal Impact face the CPL’s Calgary Cavalry and York 9, respectively, and the USL’s Ottawa Fury and CPL’s Halifax Wanderers meet in the third round.

Defending champion Toronto FC has a bye to the semi-final round and awaits the winner between Halifax and Ottawa.

Calvary and York 9 are both at home on Tuesday for the opening legs of their home-and-home series against MLS clubs.

So the CPL and its fans are about to get a measure in the league’s inaugural season of how its teams stack up against North America’s premier pro league.

The second match in each series is on July 24.

Each two-legged round is settled by aggregate score. If tied, away goals decide the winner. If still deadlocked, the second game goes to penalty kicks.

So how much of a David-and-Goliath pairing is a CPL-MLS matchup?

The average base salary for MLS players in the league’s 24th season is US$345,867, according to its players’ association.

Each team can sign up to three “designated players” outside the US$4.2-million salary cap, which allows MLS to acquire international stars and pay them millions.

The Canadian Premier League hasn’t revealed its salary cap in its first season. Forbes estimated the CPL’s average player salary between $56,000 and $75,000.

Added Whitecaps centre back Doneil Henry: “We want to win this tournament. … What we cannot do is go there without the mindset of winning and thinking it’s going to be handed to us.”

“Every Canadian derby match is going to be gritty and it’s tough, so we’re looking forward to a battle, even before the game starts,” the Brampton, Ont., native added.

Calgary finished first in the CPL fall-season standings with an 8-2-0 record and won its first game of the fall season. Vancouver (4-8-8) is second from the bottom in the MLS’s Western Conference.

“We’re very aware that Calgary’s going to be a team with a really big dose of motivation,” Dos Santos said.

The Whitecaps will not take playing a CPL team for granted, goalkeeper Maxime Crépeau said.

“We’ve seen it in the past, underdogs going through,” the Montreal native said, while adding that he doesn’t consider Calgary an underdog heading into Wednesday’s game. “In the [Voyageurs Cup], everything is equal, anything can happen. So we need to be careful.”

“Irrespective of pay, as a professional player, you want to go out there and show you are a top talent and you deserve to be on that playing pitch,” Brennan said.

“Of course, we’ll be watching video of Montreal, get a real good understanding of how they play, their strengths and their weaknesses. They’ll be doing the same with us.”

A city derby against Toronto FC for the championship in September would make for a splashy first season for York 9.

“We’d love to play against Toronto FC. I think it would be a great fixture for both sets of fans,” Brennan said.

“At the end of the day, we’re in this Cup and we’re in it to win it just like every other team.”

Ottawa’s Fury (7-7-3) rank seventh in the USL’s Eastern Conference. The Wanderers were fourth in the CPL spring season at 3-5-2 and won their fall season opener.

The arrival of the seven-team CPL this year swelled the number of teams competing for the Canadian Championship from six in 2018 to 13.

Cavalry, York 9 and the Wanderers won their first two rounds to advance. Vancouver, Montreal and Ottawa had byes to the third round.

Gemma Karstens-Smith in Vancouver contributed to this story. 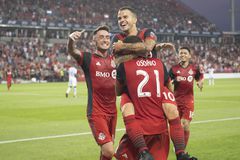