At 29 and in his eighth season in Major League Soccer, forward Patrick Mullins has seen and learned a few things.

And like fellow veteran Jozy Altidore, he is happy to share that knowledge with Toronto FC’s young talent.

“Absolutely. As a player, I certainly have goals for myself on the field and each day at training,” Mullins said. “But kind of a side part to each part of my day is that type of relationship that I do have particularly with our strikers – Jozy, [Ifunanyachi] Achara, Jordan Perruzza, Ayo Akinola.

“There is a pride I take into the day-to-day improvement that can be made on the training pitch. And all of us attackers have that in common. So it’s a great environment to go in each day and try different things, lean on different guys for advice.

“And that’s something that I really enjoy – and if there’s anything that I can share with some of our younger players who are just starting their professional careers, from my experiences, then I try to be as open and available to do that, because it’s something very important to me as a player.”

While the 31-year-old Altidore prefers to do his talking on the field these days when it comes to the media, Mullins says the big man is terrific to play with.

“It’s a joy and a delight,” Mullins said. “From Day 1, since we started working together, he’s brought nothing but a very positive influence on the field and then off the field as well.

“For me personally, I think just to exchange footballing ideas – and the things that kind of make he and I both wake up in the morning looking forward to going and playing the game, those have been some of my favourite moments with him.”

Altidore also enjoys the role of mentor, according to Mullins.

“You can tell that’s something that’s very important to him He very much brings that infectious personality, infectious talent on the field to the entire group.”

Mullins and Altidore have played a combined 331 MLS regular-season and playoff games, not to mention Altidore’s time with clubs in England, the Netherlands, Spain and Turkey.

Both have also endured heavy expectations.

Altidore was 16 when he made his pro debut for the MetroStars, who took him 17th overall – hence his jersey number – in the 2006 MLS SuperDraft.

Mullins, then with the University of Maryland, won the MAC Hermann Trophy as the top male NCAA soccer player in both 2012 and 2013. He scored 47 goals and added 35 assists in 92 career matches at Maryland.

TFC has no shortage of young attacking talent. Perruzza is 20, Akinola 21, Achara 23.

And there’s plenty more In the midfield in Jahkeele Marshall-Rutty (16), Jayden Nelson and Ralph Priso (18), Noble Okello (20) and Jacob Shaffelburg (21).

Perruzza said Altidore and Mullins have been “completely professional.”

“I’ve gone on to have great relationships already with both of them,” said Perruzza, a former TFC 2 player whose first-team contract kicked in in January. “Even over the last couple of preseasons that I’ve been involved with the team, I’ve always got along well with Patrick and Jozy obviously, he’s just such a good influence on me.

“[Altidore] takes the time out of the day, just to come talk to me about training and matches. We sit there and talk about San Antonio [where Perruzza played in the USL], my time in Italy [with the Empoli youth system], my time with the [TFC] second team. He’s just very very professional, I think.”

Mullins is also appreciated by the veterans.

“He shows up every single day,” fullback Justin Morrow said. “In practice, he’s one of those guys that’s always up your backside. As a defender you don’t like to play against those forwards. He’s always giving you a hard time.

“He’s extremely professional. He’s smart in the way he moves on the field. And those guys are always ready for their moments. That’s the sign of a good professional. And being on a team like this, with a DP [designated player, Altidore] in his position, the chances don’t come so frequent. But when they do for him, he steps up.”

Mullins did just that in the April 14 second leg of TFC’s Scotiabank CONCACAF Champions League round-of-16 tie, scoring in the 2-1 win over Mexico’s Club Leon.

Mullins, a member of the MLS Players Association executive board, has scored his share of memorable goals.

He holds the MLS record for fastest four goals in a half. He did it for D.C. United against San Jose in September 2017, scoring in the 57th, 60th, 68th and 88th minutes (Clint Mathis holds the record for most goals in a game with five, set in 2000).

TFC fans may have forgiven him for scoring his first MLS goal against Toronto, a left-footed rocket past Julio Cesar in May, 2014 at BMO Field while playing for New England.

Mullins works hard at his craft. During TFC’s preseason lockdown due to an outbreak of COVID-19 among players and staff, he resorted to working out on a “balcony space.”

“My mini-pitch of sorts,” he joked.

He said it reminded of being a kid, kicking a ball against the wall in his bedroom.

Mullins, who married his long-time sweetheart Meggie in January (they have been reunited at TFC’s pandemic base in Orlando), has experienced plenty off the pitch as well.

About to enter eighth grade, he and his family had to flee New Orleans to escape hurricane Katrina in 2005. They were no strangers to hurricane evacuations but this time the family home was engulfed.

After 15 years in the same house, the Mullins’ lived in six different places over the next five months.

“It sure makes you happy to have soccer in your life,” Mullins told The Canadian Press in a 2019 interview. “Because when we were moving all over the place, that was the one constant for me and my brother. To take a few hours out of the day and go kick the ball around at a local club was better than waiting around thinking and wondering what had happened to your house or the city that you knew.” 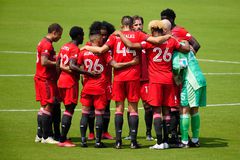 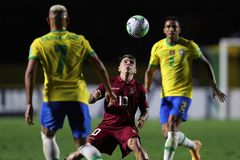