Stewart Kerr had no idea what do with himself. A goalkeeper with Scottish giant Celtic for a decade, he had just been forced to retire at age 26 because of a crippling back injury that resulted in two discs being surgically removed.

"It was very difficult. I had a year or so that was pretty aimless," said Kerr. "It's a totally different way of life.

"When all of a sudden you're in the real world and you have to look after yourself ... it's a pretty humbling experience."

He eventually decided he wasn't done with the sport and enrolled in courses to get his coaching licences. His passion for goalkeeping landed him a couple of jobs in Scotland, and then in Major League Soccer with Toronto FC and Orlando City SC.

When the Vancouver Whitecaps needed someone to coach their goalkeepers in 2017, Kerr was an obvious choice.

"He does exactly what it says on the tin," said Whitecaps head coach Carl Robinson. "In the one or two conversations I had with him in the off-season he identified my goalkeepers' weaknesses within one hour.

"I'm not a goalkeeping expert, but it's taken me maybe three or four years to work out what they are. He knew in one hour. That attracted me to him."

The 42-year-old Scotsman, who replaced Marius Rovde after he joined expansion Minnesota United, also prepared Brazil's Julio Cesar for the 2014 World Cup while both were with Toronto.

"I've never believed as a goalkeeping coach you can have one style," said Kerr, who signed on in January and has a contract through 2018. "What works for one guy doesn't work for another.

"You've got to help the accelerate their strengths and work on the weaknesses."

At a recent Whitecaps' practice, Kerr could be found at the lonely end of the training ground blasting shot after shot towards his Whitecaps proteges — with constant feedback and encouragement — in a driving spring rain.

"We'll have that great save, but it's about being consistent," Vancouver No. 1 'keeper David Ousted said of Kerr's philosophy. "It's about making the easy saves look easy, and making sure you make them."

While the move was a no-brainer for the Whitecaps, it also made sense for Kerr.

He had initially gone to Toronto with his wife because of her work in pharmaceuticals before the TFC job coincidentally opened up. When Kerr signed on with Orlando for the 2016 season, she was unable to work in the U.S., but will join him in Vancouver with their teenage daughter once the school year ends.

"The club's been absolutely fantastic on and off the pitch," he said. "That's huge."

The Whitecaps were stingy in 2015, allowing just 36 goals in 34 MLS matches on the way to finishing second in the Western Conference.

Last year was a different story. While teams defend as a unit — Vancouver's backline was a mess at times — the club allowed 52 goals for the second-worst total in the West to miss the playoffs.

Ousted is the undoubted leader of the Whitecaps' goalkeeping pack, but backups Spencer Richey and Paolo Tornaghi have already seen action in the young campaign.

"The thing that separates the guys who do really well from the guys who are average is small details," said Kerr. "If you can do the small details properly and you save the ones you should save, the manager can go to bed knowing his goalkeeper's not going to make a big mistake."

The Whitecaps have two losses and a tie to start this season, but have had a player sent off in both defeats, including Ousted in one 3-2 setback, while not conceding a goal at full strength.

Like the disappointing turn his career took before he got back on track, Kerr sees better days ahead for himself and the Whitecaps.

"I'm a great believer in what doesn't kill you makes you stronger," he said. "If you can come through it the right way and learn then it will make you better in the long run." 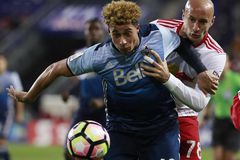 Vancouver Whitecaps sign Peruvian attacker Yordy Reyna
January 23, 2017
Report an error
Due to technical reasons, we have temporarily removed commenting from our articles. We hope to have this fixed soon. Thank you for your patience. If you are looking to give feedback on our new site, please send it along to feedback@globeandmail.com. If you want to write a letter to the editor, please forward to letters@globeandmail.com.
Comments