Lionel Messi set up Ivan Rakitic to score the winner as Barcelona beat Manchester City 1-0 on Wednesday to reach the Champions League quarter-final for a record eighth consecutive season.

Faced with the daunting task of overturning a 2-1 first-leg loss, Manuel Pellegrini's City needed an inspired showing from goalkeeper Joe Hart just to avoid a thrashing as Messi and Neymar ran amok at Camp Nou.

City's only chance of a lifeline came with a penalty in the 78th minute, but Barcelona keeper Marc-Andre ter Stegen saved Sergio Aguero's spot-kick.

Messi passed for Rakitic to score in the 31st-minute of a lopsided first half that saw Neymar and Luis Suarez hit the woodwork for the home side, while a rattled City racked up four bookings to one shot on goal.

City has now lost to Barcelona at this stage of the competition for two years in a row, and is still waiting to make its first appearance in the final eight of Europe's top-tier tournament.

The contest also highlighted the gulf that has opened up between Spanish and English soccer at the highest level of club soccer.

With Real Madrid and Atletico Madrid also through, Spain now has three teams in the quarter-final for a third season in a row. By contrast, after having a quarter-finalist each year from 1997-2012, England has none for a second time in three seasons.

Juventus also advanced on Wednesday after winning 3-0 at Borussia Dortmund and 5-1 on aggregate in the night's other game. Juventus forward Carlos Tevez scored two goals and set up another in in his best European performance for years. Serie A leaders Juventus, unbeaten in its past 12 matches away from home in all competitions, were never threatened by toothless Dortmund, which had high hopes of overturning its first-leg defeat in Turin.

Bayern Munich coach Pep Guardiola took his seat just in time to see his former team nearly open the scoring when Dani Alves recovered the ball from Vincent Kompany inside City's area. His pass found Neymar, but the Brazilian's shot hit one post and squirmed along the goal line before turning past the other upright.

While City's showed early jitters, Barcelona displayed its usual flair and Messi drew the first of many saves from Hart after a quick interchange with Andres Iniesta.

City quickly found itself in the predicament that the only way it could slow down Messi– who dribbled through at least three City player's legs before halftime– and Neymar was by bringing them down. That meant Fernandinho, Aleksandar Kolarov, and David Silva were all booked for fouling the duo by the half-hour mark, and Samir Nasri would further hamstring his side by kicking Neymar after Rakitic put Barcelona in front.

Jordi Alba started a counterattack, Neymar used a smart move to lure in right back Bacary Sagna, and Messi drew the deserved attention of three defenders before lobbing a pass over the top to the unmarked Rakitic.

Rakitic used his chest to control Messi's cross before lobbing the ball over Hart and into the far side of the net.

Luis Suarez, scorer of both Barcelona's goals in the first match, was the quiet member of Barcelona's attacking trio until Neymar met his run with a long pass that left him with Hart to beat, only for his chipped shot to bounce off the post one minute before halftime.

City improved with winger Jesus Navas on for Nasri in the second half and pushed some of the action into Barcelona's area.

Navas's incursion in the 65th caused Barcelona to scramble, but a City side that needed two goals to force added time could only cling to Hart.

While counterpart Ter Stegen smothered Aguero's spot kick after Gerard Pique had fouled him, Hart had a superb second half that included denying Messi on three clear scoring chances as well as blocking back a pair of Neymar strikes.

Barcelona will now turn its focus to Sunday's home game against Real Madrid, when the Catalan club will look to protect its one-point lead over its fierce rivals at the top of the Spanish standings. 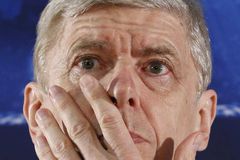 With Man City showing no progress, Pellegrini faces being the next manager swiftly removed
March 16, 2015 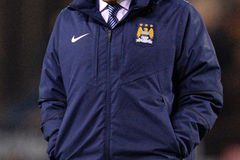