John Herdman says that every game tells a story.

The head coach of the Canada's women's soccer team learned more about his players Sunday, and for long stretches, he didn't like what he saw.

The Canadians were sloppy and plodding for long periods while also failing to capitalize on their numerous scoring chances in settling for a 0-0 draw with Mexico in an international friendly.

Ranked seventh in the world, Canada won the bronze medal at the 2012 London Olympics and is the host country of the 2015 FIFA Women's World Cup.

Mexico, meanwhile, is in rebuild mode and sits 24th in the FIFA rankings.

"You expect to beat Mexico, no disrespect," said Herdman. "(Canada) is the seventh-ranked team in the world, bronze medallists. I still think we're three or four players (away from being) that team again. Hopefully we can either find those players or get those players back.

"I think the Mexicans were worth the score today. They weren't miles away from Canada."

Herdman was especially displeased with the tail end of the opening 45 minutes.

"We just ran out of ideas. That first half, I felt sorry for people watching at home or in the stands. It just wasn't an inspirational or exciting performance," he said. "I think the players knew at halftime that people had paid some money to watch them play, given their Sundays up, and they had to give a bit more.

"It's almost like we thought this was going to be easy for some reason."

The fact that Mexico wasn't far off will be troubling for Herdman, who has been experimenting with new tactics while giving younger players a chance to show they belong.

Some failed to impress.

"I just know how much that shirt is worth to people," said Herdman. "If you get a chance to play in front of 20,000 people ... I just expect players to give everything they've physically got, mentally got.

"If you're going to play for Canada, you better be bloody good ... and be good every game."

One of the players who caught Herdman's eye was 16-year-old defender Sura Yekka, who won her second cap.

"She brought a real bright spot," he said. "If anything, she pretty much showed the way in terms of a positive attitude to really take it to Mexico and I think a couple players fed off her energy."

Herdman has brought Kara Lang back into the fold after she retired nearly three years ago because of two serious knee injuries. While the 27-year-old is still a long way off from seeing game action, it's clear that outside of captain Christine Sinclair, Canada is still starving for goals.

"It tells you a bit of a story of what we need to add to this team," said Herdman of the 0-0 scoreline.

Canada had a chance to grab the lead in the 48th minute, but Sophie Schmidt sliced a cross from Brittany Baxter over the Mexican goal.

Kaylyn Kyle then had a golden opportunity in alone in the 53rd, only to have Mexican goalkeeper Cecilia Santiago make a save before stopping Emily Zurrer's effort on the ensuing corner.

Santiago came up huge for her team again on Sinclair in the 78th minute before a Mexican defender blocked Lauren Sesselmann's rebound chance.

Santiago had Sinclair's number once more in the 87th, stopping her effort with a diving save as Canada failed to find the elusive goal.

"It was a big challenge to come here and close the year with a good performance," said Mexican head coach Leonardo Cuellar. "Obviously we're still far away from where we would like to be."

Sunday's crowd was vocal, with pockets of Mexican supporters scattered across B.C. Place Stadium, which will be the site of the final in 2015.

Coming off a drab 3-0 victory over South Korea in Edmonton last month, Canada had some early chances before goalkeeper Erin McLeod was forced to make a sprawling save in the 10th minute off Mexico's Guadalupe Worbis.

Baxter, formerly Britanny Timko prior to her marriage this summer, put the ball in the back of the Mexican goal behind Santiago in the 13th minute, but she was ruled offside.

McLeod had to be sharp again in the 15th when Worbis, far and away Mexico's most dangerous threat in the first half, stepped around a Canadian defender and fired another shot on target.

Sinclair then rounded the Mexican 'keeper a minute later, but couldn't get her shot past an on-rushing defender.

Wilkinson limped off in the 28th minute and made way for Yekka, whose energy down the right side gave Canada some life.

Mexico had a dangerous cross in the 29th minute, but Zurrer did well to head the ball behind for a corner that Canada would deal with to end the threat.

Despite Sunday's performance, Herdman has 18 months until the start of the World Cup to figure out his best lineup and formation.

"Today told us about players. That's what the game constantly does," he said. "Every time we play it's a story. You read into that what you want."

Notes: Sunday's game marked Canada's first in Vancouver since a 3-1 victory over Mexico in the CONCACAF qualifying tournament that secured a spot at the 2012 London Olympics. The Canadians would eventually go on to win bronze following a memorable extra-time loss to the United States in the semifinals. ... Canada's next game is Jan. 31 against the U.S. in friendly to be played in Frisco, Texas. 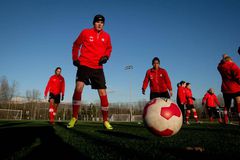 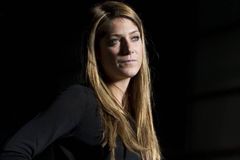 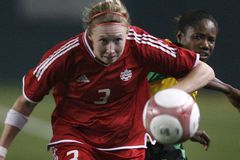 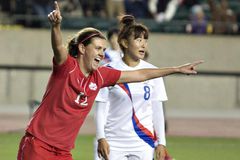