Kadeisha Buchanan sometimes has to pinch herself.

The 18-year-old defender with Canada's women's soccer team was always confident in her ability, but she never thought her rise would happen this fast.

"I did not expect to come in at such a young age," the Toronto native said this week. "Sometimes when I'm in my room I just relax (and think) 'I'm actually here.' This is a huge opportunity that I'm willing to take and do my best."

After scoring her first goal with the national team in a 1-1 draw with the United States last month, Buchanan will get another chance to show off her talents when Canada hosts Germany in another friendly on Wednesday night.

And as Canada continues its preparations ahead of hosting next year's women's World Cup, Buchanan has fit in seamlessly with the national team after impressing at lower levels.

"I don't think it's difficult because my teammates just encourage me to bring what I bring to the team," said Buchanan. "They're very accepting to what I bring."

Canada head coach John Herdman said Buchanan — who will play at this summer's under-20 women's World Cup on home soil — has impressed him ever since he first saw her at an under-17 camp in 2011.

"She was just streets ahead of anything I'd seen before," said the Englishman. "We didn't fancy taking her to the (2012) Olympics because she was 15. She probably could have handled it, to be honest. She's that good."

Herdman said Buchanan's versatility is what has made her such an effective player in 13 appearances for her country, including 11 starts.

"We've challenged all the senior players to start showing the DNA of a modern centre back, and a modern centre back can play like a midfielder," he said. "They can disguise their passes, they have a range of different types of passes and they can defend. These younger players have been able to do that. Kadeisha's never given her shirt back."

Canada comes into Wednesday's game at B.C. Place Stadium ranked seventh in the world by FIFA, while the Germans sit No. 2 behind only the Americans.

Herdman's team lost 1-0 in Germany last year in game that saw Canada defend well, but fail to get much going offensively.

With less than a year until the World Cup, he wants to see more positive play as the team continues to build towards the showcase tournament.

"We have to shift forward pretty quickly on how we attack the game. I think that's been a big emphasis over the last couple of days," said Herdman. "Last time we played against Germany we defended well, we hung on for 90 minutes, kept it within one goal. But we definitely didn't threaten them in a way that, if you're going to win a World Cup, you have to.

"I'm hoping that we're a bit more lively. The game might be a bit more open and they might get a few more chances to score because we're trying to change a few things in the way we go about how we play. Judge us on the amount of shots, crosses we have in the game and that will give an idea of how we've progressed against Germany."

Canadian captain Christine Sinclair said Wednesday's game is crucial as the team looks to see where it stacks up against the world's best on the field that will host next year's final.

"This is a huge preparation game for us," said the veteran striker. "Obviously a World Cup venue and we're playing the second-ranked team in the world. I don't think many people understand that. They just see the Americans. Germany is a quality side.

"It's a completely different test for us."

Herdman has tried to implement a more free-flowing system since Canada's bronze-medal performance at the London Olympics two years ago, and despite that 1-1 draw with the U.S. in May, Sinclair said the players still have a ways to go.

"I think consistency for us right now is very important. We're coming off a decent result against the Americans," she said. "It's important for us to be able to put together another one against another top side because that's what's going to be expected in the World Cup."

While Canada has continued to produce good young talent in defence and midfield, the country still relies heavily on the 31-year-old Sinclair for goal scoring.

Herdman said the national team is constantly trying to identify and develop talent in the attacking third, but it has not come easy.

"You have to be ready to have a talent system where you have a profile, you know what that profile is and players then develop from the age of 13 on to fit that profile," he said. "I think that's not what we've done in the past. We haven't had a very clear profile.

"It's going to take time, but with the talent we've got, another (Sinclair) is going to pop up soon."

Herdman said he expects Germany to present its usual well-organized defence on Wednesday, adding that his side will have to be clever in attack if it's going to defeat the European giants for the first time.

"It's got to be a high-tempo, possession game and we've got to have players with the technical capacity to work against that German block," he said. "There isn't a better defensive unit. They're physical, they move collectively together on every blade of grass, they're so hard to break down. It's a huge challenge.

"You're going to see one of the best teams in the world here — a huge challenge ahead of us."

A year out from the World Cup, another huge challenge will be how Canada deals with the pressure that is already starting to mount as tournament hosts.

But it's something Herdman said both he and the players will relish.

"When you come into a job like this, at the end of the day my role is to help these girls fullfil their dreams," said Herdman. "They want to win a World Cup here. I think collectively we all feel a bit of pressure that we don't want to let the country down, but we're just going towards it, embracing it.

"It's what gets us out of bed in the morning. We look it as our opportunity and not a curse. As soon as it becomes a curse, then you lose sight of why you come to work."

Buchanan leads the next surge of Canadian soccer stars
May 12, 2018 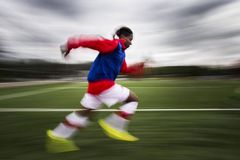 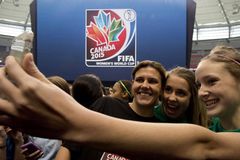