No matter how much time passes since the heartache and redemption of the London Olympics, the same questions keep flying at Canada's most famous goalkeeper.

What about that six-second call? Don't you feel robbed?

Erin McLeod can't blame the kids for asking. "What if … " is a constant theme in her mind, too.

"I think about that every day, and I probably will for a very long time," McLeod said in a phone interview on Friday from New Brunswick, where she'll be coaching youth soccer clinics.

It has been two months since McLeod found herself at the centre of a gut-wrenching and controversial Olympic semi-final loss to the United States. A Norwegian referee, Christiana Pedersen, awarded the U.S. a free kick in front of the Canadian goal after calling McLeod for time wasting, claiming she took more than six seconds to put the ball in play. It's an obscure call rarely used in international competition – especially without a yellow card being issued prior to a penalty kick – but it set the stage for a tying goal by the Americans. Canada lost 4-3 in overtime to the eventual Olympic champions.

Team Canada captain Christine Sinclair scored all three goals in the semi-final and was quoted after the match saying the team felt "cheated." On Friday, her disciplinary hearing was conducted at FIFA headquarters in Zurich, on charges of "unsporting behaviour." Canadian Soccer Association officials expect to have an answer from FIFA about possible fines or sanctions by next week.

McLeod, 29, of St. Albert, Alta., has had a lot of time to consider what might have been, and who was to blame. She says she doesn't want to live with bitterness. Or regrets.

"It's hard to swallow. And yeah, I've never seen that call in my entire career," she says. "But I did have [the ball] more than six seconds, and the referees have to make those decisions, and we have to respect them, as difficult as that can be, and as emotional as that can be sometimes. It's the rules of the game."

Asked if she stood by the words of her teammate, McLeod said she did not want to comment about Sinclair's remarks.

The Canadian team won't be together again until December, when they meet in Vancouver for baseline physical testing. Until then, many of the athletes are taking a post-Olympic break. Others, including McLeod, are still trying to keep the ball rolling after Canada's historic third-place Olympic result, making many public appearances and helping develop the sport at the grassroots level. After a week in New Brunswick, McLeod will travel to Calgary, then Vancouver, running kids' soccer camps along the way.

She knows the questions about that semi-final match will keep coming. So what does she tell those kids?

"I say that I'm upset because I wanted to win the game," McLeod said. "But I try to make it less about the call. Because if you look at that game, our team has never played like that before. And we had the upper hand on the best team in the world for a long period of that game. So I try to focus less on the call and more on everything else.

"I don't want to have kids feeling like I got robbed. At the end of the day, we did everything that we could, and I think that's more important."

There's something else that people never fail to ask, which is why McLeod always keeps her prized souvenir from London close at hand.

Can I see your bronze medal? 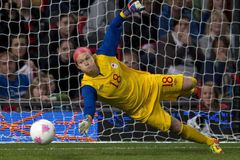 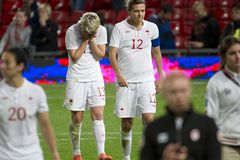 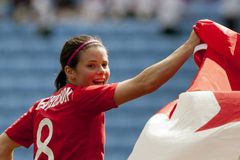