Lars Hirschfeld's commitment to Canada was hard to miss Thursday.

Under an ice pack on his right foot was a nasty bump, the size of a "camel hump" in his words. The ugly bone bruise came courtesy of a two-footed tackle from an opponent in a Norwegian league game 21/2 weeks ago.

"I'm here to play," the 33-year-old goalie from Edmonton declared after a closed practice at BMO Field. "It hurts like hell, but there's no excuses.

"I played the last two games for my club [Oslo's Valerenga Fotball] through pain. That's just how it is."

It's every man to the pump for Canada, whose World Cup qualifying future will be determined over the next five days, with a home game against Cuba at BMO Field on Friday and a likely crucial clash in Honduras on Tuesday.

The top two teams advance to the six-country final round of qualifying in CONCACAF, which covers North and Central America and the Caribbean.

Panama plays host to Honduras on Friday night in a game the Canadians will be watching closely. The Panamanians wraps up qualifying play in Cuba on Tuesday.

It's been 15 years since Canada last made the final round in CONCACAF. And it didn't go well. The Canadians finished last in the group with a 1-6-3 record.

Three of the six teams from the final round of CONCACAF qualifying will advance to the 2014 World Cup in Brazil. The fourth-place team will take part in an intercontinental playoff.

If the current crop of Canadian players feel any pressure, they aren't showing it. That comes straight from the top, where coach Stephen Hart exudes calm.

"He's the most laidback man I've ever met," forward Iain Hume said with a grin.

"He's great to work for and I think you can see that the way the guys train, the way the guys play. They do everything they can for him. He's helped turn us into a team that plays football, rather than a football team."

Hart also has a good sense of humour and is creative when it comes to motivating his players, said captain Kevin McKenna.

At a meeting Wednesday, for example, Hart showed the team a video of Tiger Woods' famous chip at the 16th hole at the 2005 Masters – a long-range shot that saw the ball famously swerve en route before pausing on the lip and then rolling in.

McKenna and Hirschfeld did not share the message that came with the video but the Canadian captain said it's an example of Hart's management style.

"He comes with a different approach and I think everyone responds to it," McKenna said.

Hart was as relaxed as ever Thursday, despite acknowledging the coming schedule represented "the biggest" moment of his coaching career.

"You know what? Any time I wake up and there's a game and I have players to work with, it's like Christmas for me," the Trinidad native said with a big smile. "That's the way I look at it. This is the part I enjoy.

"I really enjoy working with the players and having a game to work towards – and a game that really means something. You can't ask for more as a coach, really."

There is much at stake for the Canadian Soccer Association.

In the wake of the public love-in for the women's team after the Olympics, the CSA must be dying to find out how the country would respond to the men's team joining the sport's elite at the World Cup.

Not to mention the money.

Teams that exited after the first round of the 2010 World Cup earned $8-million (U.S.), in addition to the $1-million FIFA provided each finalist to prepare for the event. That's big money for a Canadian association whose annual budget is about $20-million.

Of the 11 other CONCACAF teams in this round, only Cuba (with zero) has scored fewer goals. Canada is tied for offensive output with 0-3-1 Antigua and Barbuda, hardly a juggernaut in the region.

Losing leading scorer Dwayne De Rosario to a knee injury in Panama has not helped the Canadian cause.

Hart says he has been pleased with "certain aspects" of his team's play.

"You always want to score more goals but if you look at how we've played defensively, behind the ball, how we've counter-attacked, some of the chances we've created, you can't really ask for more except for the finishing aspects of our game," he said.

"It's something I wish I could spend a couple of weeks with the forward players and getting that relationship right."

With goal difference the first tiebreaker, Honduras is plus-two compared to zero for Canada going into Friday's play.

The temperature was a brisk 8C during the Canadian late-morning workout Thursday at BMO Field.

"It's cold but I think it's going to be colder for them," McKenna said. 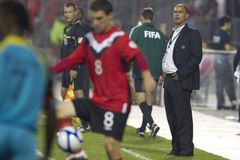 Julian de Guzman has high hopes for Canada when they face Honduras
October 10, 2012 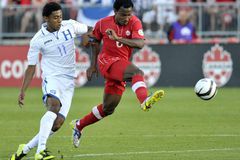 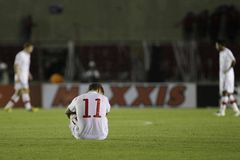