Canada will still be thinking World Cup once the women's showcase tournament ends July 5, as the Canadian Soccer Association will then turn its attention to the 2026 men's World Cup.

The CSA has already gone on the record in declaring its interest in hosting the men's event, which last took place in CONCACAF, which covers North and Central America and the Caribbean, in 1994 in the United States.

FIFA's executive committee has now started the ball rolling. The first set of documents asking for declarations of interest will go to the 209 member associations likely in June, with a decision on the host country planned for the FIFA Congress in May, 2017.

Is it Canada's turn?

"Our focus is on the Women's World Cup and executing that, because if we don't execute that it's not going to be a good segue into us looking to bid for 2026," CSA president Victor Montagliani said in an interview Wednesday. "Once the Women's World Cup is over, then we'll start looking at 2026 and seeing what we need to do to put together a bid."

"Obviously, there is interest there," Montagliani said.

Montagliani notes that Canada is the only Group of Eight country not to host the World Cup. Come this summer, Canada will have hosted every CONCACAF championship and every FIFA event except for the world futsal, beach and club championships and Confederations Cup.

Should Canada throw its hat in the ring, it will be a solo rather than joint bid, he said.

In the past, host countries have used eight to 10 stadiums, although Canada has taken note of 2022 host Qatar's plan to use just eight.

This summer's Women's World Cup is being staged in six Canadian cities – Vancouver, Edmonton, Winnipeg, Montreal, Ottawa and Moncton. Toronto offers several options with Rogers Centre and BMO Field, which is increasing in size through ongoing renovations, with room for more temporary expansion. Montreal is another multivenue possibility.

"I don't think, when push comes to shove, that finding eight venues is going to be a challenge," the CSA boss said.

As to the contentious issue of grass versus artificial turf, Montagliani says the nitty-gritty on playing surface comes later rather than sooner.

"The bids are usually not that technical on surfaces," he said. "For instance, when we bid on the Women's World Cup, there was nothing about the surface."

"A lot of those technical decisions are made after," he added.

The French Football Federation and Korea Football Association, however, both confirmed their bids for the 2019 Women's World Cup included real grass. France won the bidding contest.

The men's showcase tournament has always been played on grass.

FIFA rules allow for either surface, as long as they meet certain standards. During the debate over the Canadian tournament surface, FIFA secretary-general Jérôme Valcke noted a men's World Cup could be held on artificial surfaces "sooner rather than later."

"Every country will have the ability on play on whatever surface FIFA wants us to play on," Montagliani said. "I don't think that's going to be a problem. We'll cross that bridge when we come to it, I guess."

The 2018 men's tournament is set for Russia.

Montagliani pointed to Canada's rich history of hosting major sporting events. "It all comes down to the will of us as a country to put this on," he said.

FIFA could still choose someone else over Canada, he acknowledged.

"But in terms of do we have the capacity and ability to do it? Absolutely," Montagliani said. 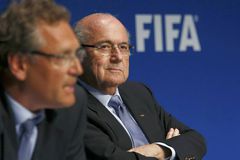