At the corners of Richards and Dunsmuir Streets in downtown Vancouver stands the Holy Rosary Cathedral, whose tallest spire climbs nearly 70 metres and whose cornerstone was laid in 1899.

It is here where Russell Teibert – the promising young Canadian on the Vancouver Whitecaps – found quietude last year, and listened to the homilies of Father Glenn Dion.

Teibert's progress in soccer had stalled. A year earlier, Teibert had been dubbed a "teenage sensation," and was an 18-year-old among the starters when the Whitecaps made their Major League Soccer debut. Then, there were injuries, followed by middling play. "He didn't make much of an impact," says Whitecaps head coach Martin Rennie of Teibert's 2012 season, when he played four games and just 117 minutes for the team.

Teibert grew up in a Catholic family in Niagara Falls, Ont., and at Holy Rosary took in Father Dion's words.

"You look at a guy like that, who's led a very good life, he seems at peace with himself, and he's got it figured," said Teibert in an interview last week, sitting on steel bleachers in the sun after a practice. "I think that's the simplest thing, just to be happy."

Teibert, 20, has emerged. He drew solace in church but it was in the off-season where he rebuilt his game – focused on things like longer passes and stronger battles for the ball against opponents. He saw more of the bench in the first month of this season, but thereafter Teibert has started five games – and in a sixth, when he came on early as a sub against the Los Angeles Galaxy, he scored the first two goals of his career.

On Wednesday, Teibert and the Whitecaps will attempt to win their first Canadian championship, against the Montreal Impact.

Vancouver has come close to the crown in past years but, often with a twist, failed to win. Two weeks ago, in the first leg of this year's two-game final, Vancouver and Montreal played to a scoreless draw. The winner goes on to the CONCACAF regional club tournament – where Toronto FC has previously produced some success, in its otherwise forgettable history.

In MLS, it is the Impact who, in their sophomore year, have jumped to the fore among Canadian franchises, as they rank second in the Eastern Conference, at 7-2-2, while the Whitecaps sit in eighth in the West at 3-4-4.

Seizing the Canadian championship would mark a potential lift for the Whitecaps, who in their two-and-a-bit seasons have talked of grand goals but never really produced results.

Teibert was at the centre of a jump for the squad earlier this month, when his two goals propelled the Whitecaps to their first victory against the Galaxy. The team has always seemed to have strong pieces – such as current Premier League veteran Nigel Reo-Coker – but always seems to stumble, not as badly as Toronto but nevertheless unable to generate momentum.

Teibert could be part of the resuscitation. And, beyond the Whitecaps, he's also highly considered for Canada's men team, forecast as a strong player for another operation with a weak record. Reo-Coker has gone so far as to exclaim Teibert could be the "future of Canadian football."

Hyperbole, perhaps, but Reo-Coker and Teibert have formed a quick bond, and play in the midfield together. And Teibert is one of the few Canadians with regular time on the field in MLS.

Tony Fonseca, the new technical director for Canada Soccer, who is in charge of a rethinking of soccer in Canada, has watched Teibert grow since 2008. One thing Fonseca's noticed is a loosening up. Teibert is a self-confessed perfectionist. In the past year, he's been counselled to take risks in his game. Fonseca sees it.

"He's actually being creative, something that was a lacking a little bit," Fonseca said.

After practice last week, Teibert mostly looked out at the field during the interview, where a clutch of his teammates goofed around. He has a distinctive hair style, the back and sides of his head shaved, a tilted wave-like Mohawk sweeps up to the right. A thin beard completes the frame. After the up and down of his barely started career, Teibert feels poised.

"I want to be great for this country, first and foremost," he says. "I want that weight on my shoulders. I want to be one of Canada's best players. … The pressure when I was younger, I feel like I was ready for it. I've always liked that pressure."

Whitecaps and Impact go scoreless in first leg of Canadian Championship
May 15, 2013 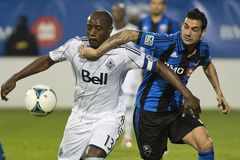 Impact look to ride momentum past Whitecaps in Canadian Championship
May 14, 2013 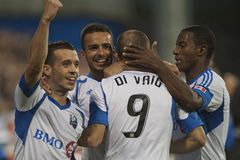 Timbers' Will Johnson stings Whitecaps with late equalizer
May 18, 2013 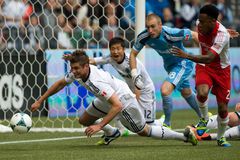