Christina Julien is one of a select few Canadians whose soccer skills led them to Russia.

Veteran defender Ante Jazic spent time with Kuban Krasnodar before signing with the MLS Los Angeles Galaxy. And some prospects like Joseph Dichiara have earned contracts.

Julien's club ties to WFC Rossiyanka stand out on a Canadian national team whose players are largely spread around the National Women's Soccer League in the U.S.

"It's been an experience, that's for sure," the 25-year-old from Cornwall, Ont., said with a smile. "There's been a lot of ups and downs.

"It's such a privilege to be able to go to Russia and live there and just experience their lifestyle. You take the good with the bad, you get that experience while you're there."

Julien, an alternate with the Canadian team at the London Olympics, is back in camp with Canada preparing for Sunday's soldout friendly with the U.S. at BMO Field in Toronto.

It's the first time the two North American rivals have met since the top-ranked Americans defeated No. 7 Canada 4-3 after extra time in last year's thrilling Olympic semifinal.

Julien is clearly up for anything, as per her Twitter bio: "Olympian, Team Canada Soccer #10, Professional Athlete, World Traveller, & Lover. Who knows?"

That sense of adventure landed her in Russia in March, after being at the Cyprus Cup with Canada. Her agent got her a tryout at the club, which was looking to beef up its roster ahead of the quarter-finals of the Women's Champions League.

Julien had been sidelined by injury so she was looking to get back in action. She went to Russia and impressed the club, earning a contract.

Julien saw action in eight games including both legs of the 4-1 aggregate loss to Germany's Wolfsburg, which went on to win the final 1-0 over France's Lyon.

Rossiyanka's roster was global with internationals from Brazil, Nigeria and South Africa among other countries. Deep-pocketed owners were willing to pay for talent.

"It's really good football," said Julien. "They were training on a daily basis."

The team was based about 45 minutes outside Moscow – "or three hours with traffic," she said with a laugh.

Julien lived in the Russian capital and loved it.

"I was blown away," she aid. "No expectations going in. It's one of the most gorgeous cities I've ever seen."

Language was an issue. Few people speak English, so Julien learned a few Russian words to get by.

Her Russian team has three games left in its season, but two are taking place while she's on duty with Canada so Julien isn't sure if she will be back.

Her next goal is to play in France when the season starts later this summer.

Previously she had played for Jitex BK in Gotenborg, Sweden, and the Ottawa Fury.

Julien was forced to look outside of North America after she was not one of the Canadian internationals allocated to the NWSL.

"It's really hard to get in there if you're not allocated," she said.

Overseas, clubs tend to take care of room and board, with whatever they pay you basically becoming spending money, according to Julien.

The 2012 Olympics were bittersweet for Julien, who as an alternate got to experience everything but play.

"I was very lucky to be there," she said. "But on the other hand I wanted to be playing. You have that dream."

Julien, a member of Canada's 2011 World Cup squad, lost her spot to Jonelle Filigno, who missed qualifying through injury.

"Probably the hardest decision to make was Christina Julien," coach John Herdman said at the time. "She's been a big part of the team, helped us through the qualifiers, played nearly every game in my tenure."

He called it a "football decision," saying Filigno "showed that little bit more."

"I've got no doubt that Christina will come back fighting and this will be a great learning curve for her," he said.

Named an Olympic alternate, Julien didn't get a bronze medal, which prompted her family and the local paper back home to raise a ruckus.

"They've going to have my back no matter what happens," she said proudly of Cornwall.

She got an imitation medal when the Canadian team was honoured at a Toronto FC game after the Olympics.

Christine Sinclair will suit up for Portland in fledgling NWSL
January 11, 2013 Melissa Tancredi back with women’s soccer team for friendly against U.S.
May 22, 2013 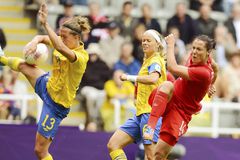 Canadian star Russell Teibert gets creative, gets noticed
May 28, 2013 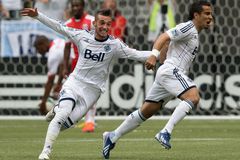